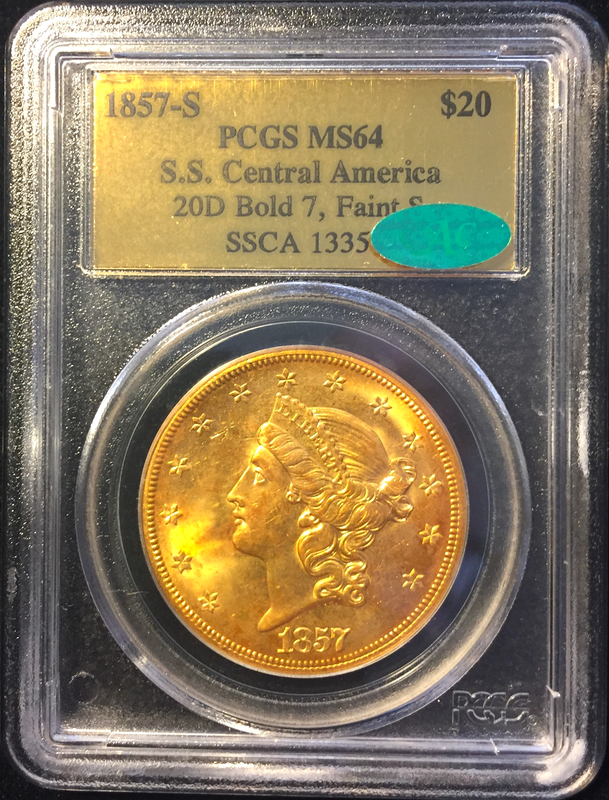 Click above image to view in eBay store
US $20 1857-S SS CENTRAL AMERICA PCGS 64 GOLD LIBERTY S.S. SHIPWRECK TREASURE The story behind the SS Central America is commonly referred to as the “Ship of Gold,” which sank in September of 1857, literally creating the “Panic of 1857.” This was of course because of the 30,000 pounds of Gold that went down (over 7,000 Feet!) with her. See below for more complete story. This beautifully luster piece has the “CAC” sticker on it, adding even more value! SS Central America, known as the Ship of Gold, was a 280-foot (85 m) sidewheel steamer that operated between Central America and the eastern coast of the United States during the 1850s. She was originally named the SS George Law, after Mr. George Law of New York. The ship sank in a hurricane in September 1857, along with more than 420 passengers and crew and 30,000 pounds (14,000 kg) of gold, contributing to the Panic of 1857. On 3 September 1857, 477 passengers and 101 crew left the Panamanian port of Colón, sailing for New York City under the command of William Lewis Herndon. The ship was heavily laden with 10 short tons (9.1 t) of gold prospected during the California Gold Rush. After a stop in Havana, the ship continued north. Map plotting the track and intensity of the storm, according to the Saffir–Simpson scale On 9 September 1857, the ship was caught up in a Category 2 hurricane while off the coast of the Carolinas. By 11 September, the 105 mph (165 km/h) winds and heavy seas had shredded her sails, she was taking on water, and her boiler was threatening to go out. A leak in one of the seals between the paddle wheel shafts and the ship's sides sealed its fate, and, at noon that day, her boiler could no longer maintain fire. Steam pressure dropped, shutting down both the pumps that had been keeping the water at bay and the paddle wheels that kept her pointed into the wind as the ship settled by the stern. The passengers and crew flew the ship's flag upside down (a sign of distress in the United States) to try to signal a passing ship. No one came. A bucket brigade was formed and her passengers and crew spent the night fighting a losing battle against the rising water. During the calm of the hurricane, attempts were made to get the boiler running again, but these all failed. The second half of the storm then struck. The ship was now on the verge of foundering. Without power, the ship was carried along with the storm and the strong winds would not abate. The next morning, September 12, two ships were spotted, including the brig Marine. One hundred fifty-three passengers, primarily women and children, managed to make their way over in lifeboats. However, the ship remained in an area of intense winds and heavy seas that pulled the ship and most of her company away from rescue. The Central America sank at 8:00 that evening. As a consequence of the sinking, 425 people were killed. A Norwegian bark, Ellen, rescued an additional fifty from the waters.[1] Another three were picked up over a week later in a lifeboat. In the immediate aftermath of the sinking, greatest attention was paid to the loss of life, which was described as "appalling" and as having "no parallel" among American navigation disasters.[2] At the time of her sinking, Central America carried gold then valued at approximately US$2,000,000 (modern monetarily equivalent to US$292,000,000, assuming a gold value of $1,000/troy ounce). The loss shook public confidence in the economy, and contributed to the Panic of 1857.[citation needed] The valuation of the ship itself was substantially less than those lost in other disasters of the period, being US$140,000 (equivalent to $3,561,500 today).[2] Commander William Lewis Herndon, a distinguished officer who had served during the Mexican–American War and explored the Amazon Valley, was captain of Central America. Commander Herndon went down with his ship. Two US Navy ships were later named USS Herndon in his honor, as was the town of Herndon, Virginia. Two years after the sinking, his daughter Ellen married Chester Alan Arthur, later the 21st President of the United States. The ship was located by the use of Bayesian search theory and a remotely operated vehicle (ROV) operated by the Columbus-America Discovery Group of Ohio, that was sent down on 11 September 1988.[3]Significant amounts of gold and artifacts were recovered and brought to the surface by another ROV built specifically for the recovery. Tommy Gregory Thompson led the group. Thirty-nine insurance companies filed suit, claiming that because they paid damages in the 19th century for the lost gold, they had the right to it. The team that found it argued that the gold had been abandoned. After a legal battle, 92% of the gold was awarded to the discovery team in 1996.[4] In March 2014, a contract was awarded to Odyssey Marine Exploration to conduct archeological recovery and conservation of the remaining shipwreck. The total value of the recovered gold was estimated at $100–150 million. A recovered gold ingot weighing 80 lb (36 kg) sold for a record $8 million and was recognized as the most valuable piece of currency in the world at that time.[5] Thompson was sued in 2005 by several of the investors who had provided $12.5 million in financing, and in 2006 by several members of his crew, over a lack of returns for their respective investments. Thompson went into hiding in 2012, and was located in January 2015, along with assistant Alison Antekeier, by US Marshals, and was extradited to Ohio, to provide an accounting of the expedition profits.[4][6][7][8] A receiver was appointed to take over Thompson's companies and, if possible, salvage more gold from the wreck,[6] in order to recover money for Thompson's various creditors.[4] In 2014, Odyssey Marine Exploration was selected to undertake the salvage.[9] The original expedition only excavated "5 percent" of the ship.[4] 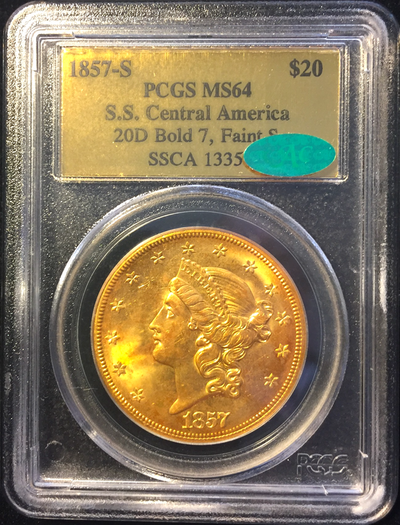 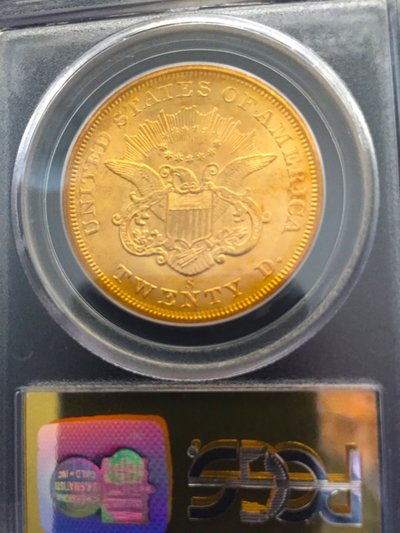 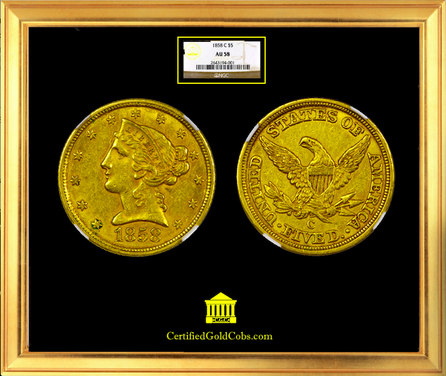 Click above image to view in eBay store
LIBERTY HEAD $20 GOLD PIECE 1904 NGC 62PL "PROOFLIKE" INCREDIBLE LUSTER AND REFLECTIVE SURFACES!  ESTIMATED THAT ONLY 100 COINS (1904) WOULD EVER QUALIFY FOR "PL" DESIGNATION AS NORMALLY THE PROOFLIKE FIELDS DIMINISHED AS THE DIES HIT AROUND A 100 PIECES!  THE POP IS FAIRLY LOW (I BELIEVE 33) AND THIS IS THE NICEST FOR THE 1904 ISSUE THAT WE'VE SEEN! 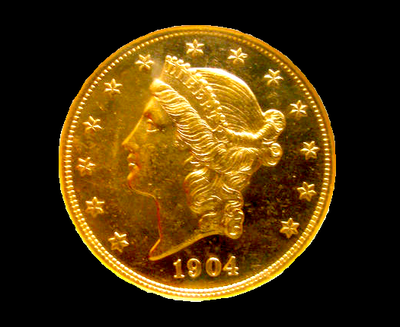 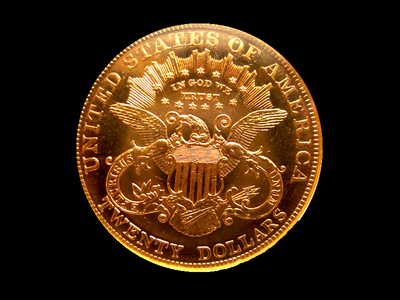 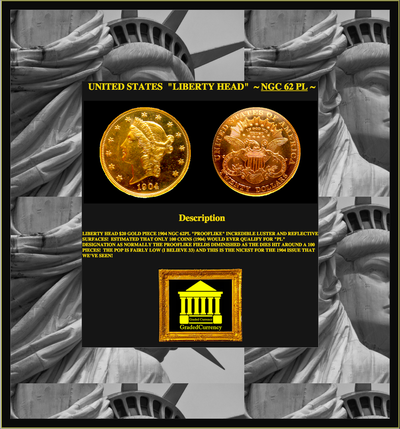 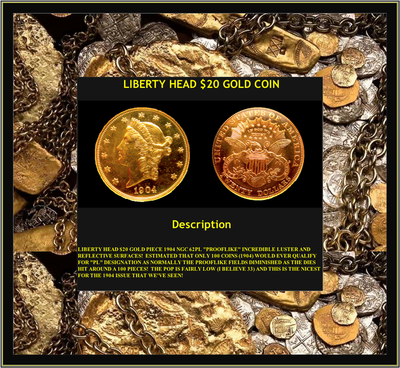 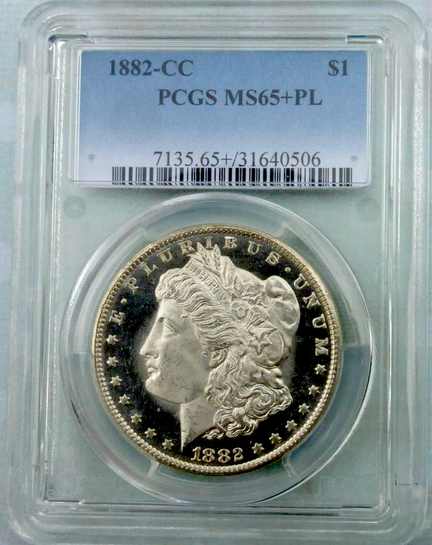 Click above image to view in eBay store
U.S.  "MORGAN DOLLAR"  $1  1882-CC  GRADED  PCGS  MS 65+ PL! THERE'S ONLY 5 OF THESE GRADED (PCGS 65+ PL), MAKING IT MUCH RARER THAN IT'S COUNTERPARTS.  THIS PROOF LIKE (PL) HAS INCREDIBLY DEEP BLACK FIELDS AND NICE FROSTY DEVICES, CREATING A STRONG CONTRAST THAT REALLY SETS THIS COIN APPART AND CERTAINLY GIVES IT AN APPEARANCE OF A DEEP CAMEO OR DEEP MIRROR PROOF LIKE AESTHETICALLY.  A GREAT OPPORTUNITY ON A LOW POP VARIETY AT A VERY AFFORDABLE PRICE! 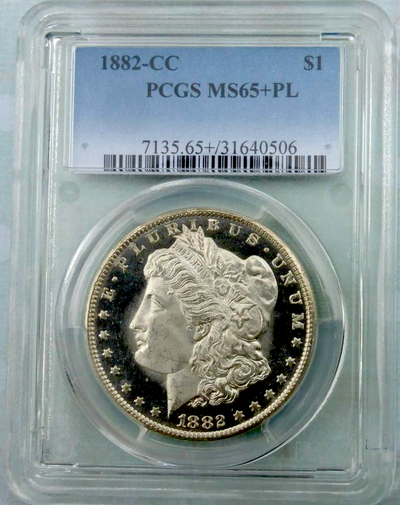 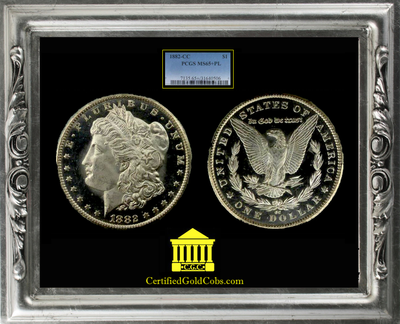 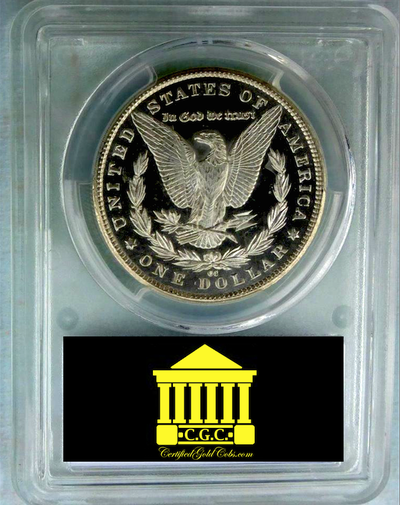 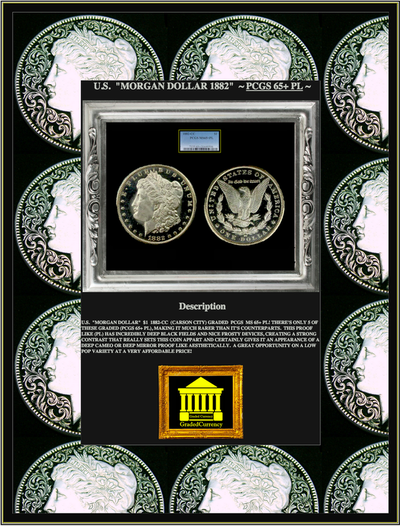