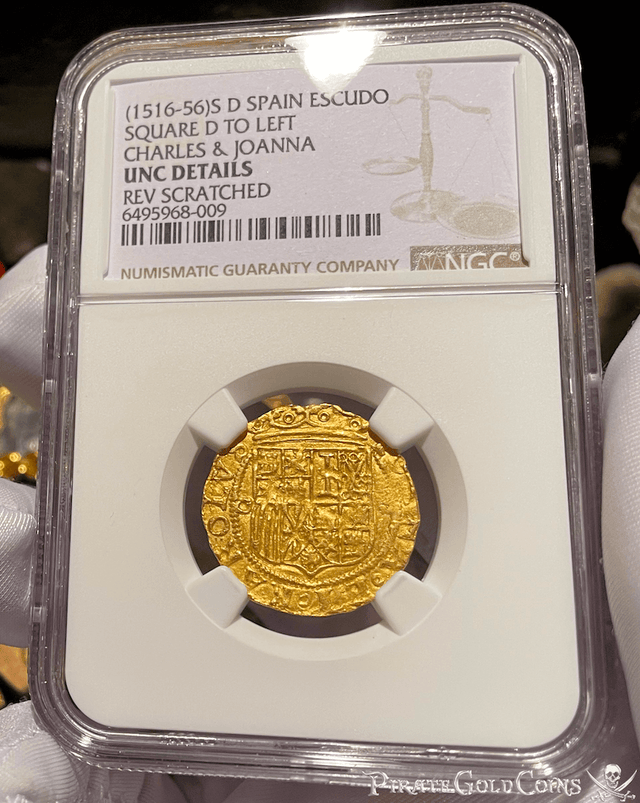 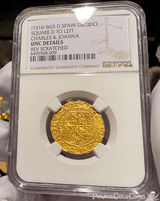 Spain 1 Escudo 1516-56 "Incredible Details" NGC UNC Dets! Wow, the Full Crown is the first thing to catch your eye. The full Legends guide your eye across the entire platchet, which is met with the pleasingly crisp Shield with the details even in the Castle showing!

JOANNA, AKA, JOANNA THE MAD WAS THE DAUGHTER OF FERDINAND AND ISABELLA (WHO ARE FEATURED ON SPAINS 1476 ISSUE (2 EXCELLENTE GOLD COIN). WHICH IS WHO CHRISTOPHER COLUMBUS GOT HIS FUNDING FROM FOR HIS EXPLORATIONS TO THE NEW WORLD (U.S.). SHE DID HAVE A BROTHER (FERDINAND) BUT HE DIED AT ONLY 19, SO SHE INHERITED HER PARENTS KINGDOMS (CASTILES & ARGON). ALSO FASCINATING TO THINK ABOUT THIS COIN BEING STRUCK IN THE TIME OF THE SPANISH CONQUISTADOR "CORTEZ" WHO OF COURSE IS THE MAN WHO CONQUERED MEXICO (MAKING HIS 1ST TRIP IN 1517, 2ND TRIP IN 1518 AND FINAL TRIP IN 1519).

Johanna was the daughter of the “Unifiers” of the Spanish Kingdom, Ferdinand and Isabella. Johanna was crowned Queen in title only as she was mentally deficient and unable to rule alone. For this reason, Johanna “shared” her rule with her son Charles I. Charles I was the first of the Spanish Kings to be named an heir to the Hapsburg House of Austria as King Charles V of the Holy Roman Empire. Charles was an industrious leader, he worked hard to encourage the expansion into the New World, and to establish better relations between the Spanish and the Natives.