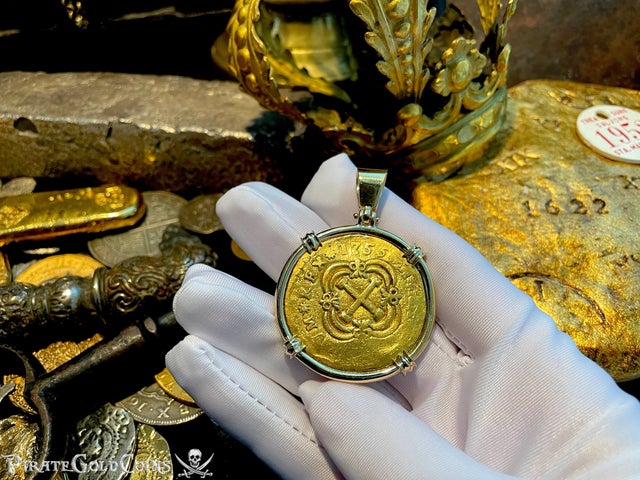 Colombia 8 Escudos 1755 "Full 4 Digit Date!" in 18kt Bezel!! Very rarely do we offer Colombia 8 Escudos and ever rarer are they able to be put into jewelry! So, here's a unique opportunity to own a pendant that, even among other treasure pendants, will be set apart of the crowds!

Missing as a date from both the Lasser and Eldorado collections, and of the utmost rarity. From a period of transition towards milled coinage, this specimen dates to the penultimate year of gold Cobs in the New World.

Plated in several renowned references on Colombian and Latin American coins, most notably Restrepo's The Cob Coinage of Colombia, 1622-1756 and Calicó's La Onza, the offering similarly comes illustriously well-provenanced--both facts that secure its utter desirability in spite of its artificially strengthened date. While this feature has prevented NGC or PCGS from certifying the coin, it is hardly unusual given the almost universally weakly struck dates seen within the series, the genuineness of the date here having been confirmed by Restrepo, Calicó, Tauler Fesser, and Menzel. Despite the usual peripheral flatness due to the uneven strike, one can still see the clear die polish lines along the clear features as the assayer and date.