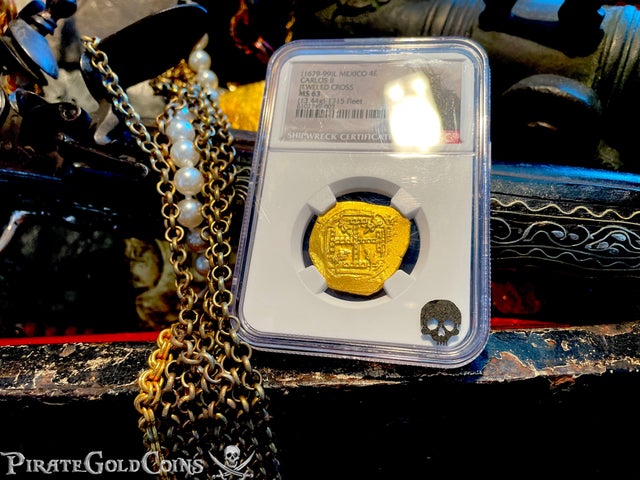 I am confident, this piece will be a "forever" Trophy Gold Cob for all the Ages!

Mexico was the first mint to strike Gold Cobs (1679) and they started with this "JEWELED CROSS" variety; hence the rarity (very few survived). We have (and had) approx. 5 total Jeweled Cross' mainly 1 escudo denominations (3 of them) and (1) of the 2 escudos and just recently listed an 8 Escudos (see our eBay store).

This piece has incredible luster, in fact, it will be one of the first things you'll be drawn to, it's color and luster. Now, add to this that on the Obverse it contains a portion of the King's Ordinal (CAR), Carlos II.

Carlos passed in 1700 (Heirless) and on his death bed passed on the throne to Philip V (grandnephew of the King of France). The 1715 Treasure Fleet was a Spanish Treasure Fleet returning from the New World to Spain.