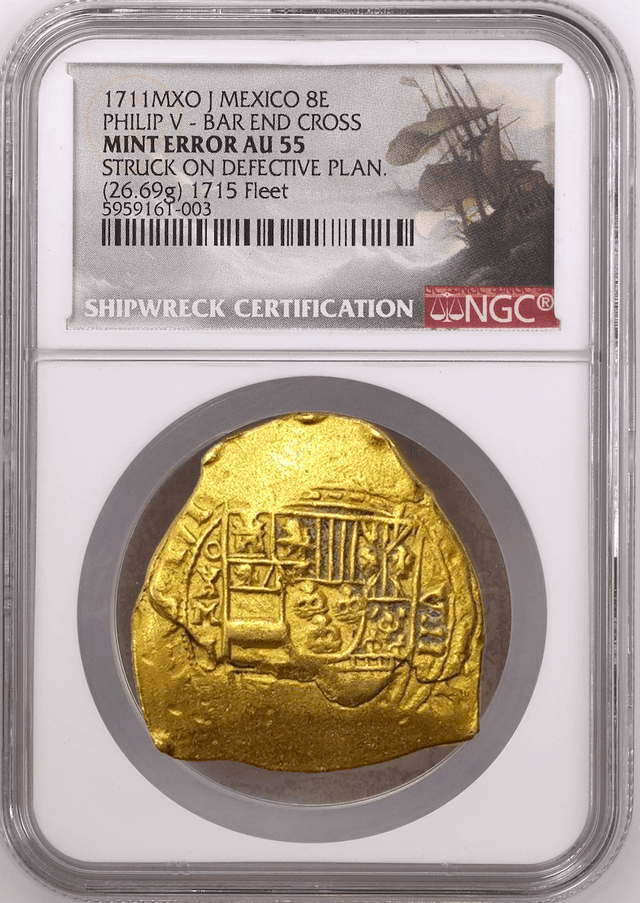 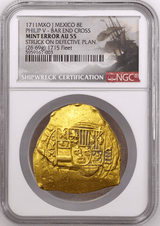 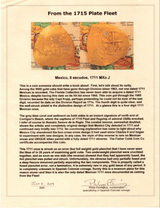 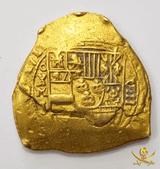 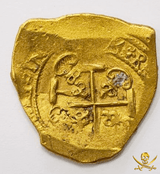 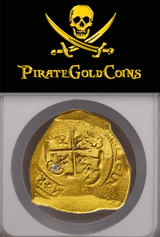 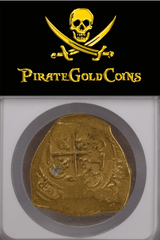 This is a coin someone should write a book about! First, let's talk about its rarity. Among the 9000 gold cobs that have gone through Division since 1963, not one dated 1711 Mexican is recorded. The Florida Collection has never been able to acquire a dated 1711 Mexico, despite having this date on its hit list since 1965. This coin got through the 1989 Division because the wily Capt. Kopp, perhaps pretending he could not be sure of the last digit, recorded its date on the Division Report as 171x. The fourth digit is quite clear, and the well-struck shield is the distinctive design of 1711. At a glance this is a four digit 1711 Mexican onza.

The grey-blue coral and sediment on both sides is an instant signature of north end of Corrigan's Beach, where the capitana of the 1715 Fleet and flagship of the admiral Ubilla wrecked. I refer of course to the Nuestra Senora de la Regla. The coraled reverse, somewhat doubled, shows the artistic and competely original design that Meixco City debuted in 1711 and continued very briefly into 1712. No convincing explanation has come to light about why Mexico City abonded the box-end cross design it had used since Charles II and began to experiment with new designs. In any case, the style of this reverse is rare on Mexican onzas and UNIQUE when paired with a fully dated 1711 obverse. The Fisher Cobb Coin Co certificate accompanies this coin.

This 1711 onza is struck on an error (but full weight) gold planchet that I have never seen the likes of in 35 years of examining gold cobs. Two underweight planchet were crucibled together, and as soon as one side (the reverse) showed that they had apparently fused, the hot planchet was pulled and struck. Unfortunately, the obverse had only partially fused and a deep fissure remained, partially separating the two components. This is properly called a fused planchet error, not a lamination. It is extremely rare in any gold issue of any period. It is completely unkown in Spanish Colonial coinage. Surely this is a museum piece for this reason alone- and then it is also the only dated Mexican 1711 onza documented as coming from the Fleet Shipwreck!