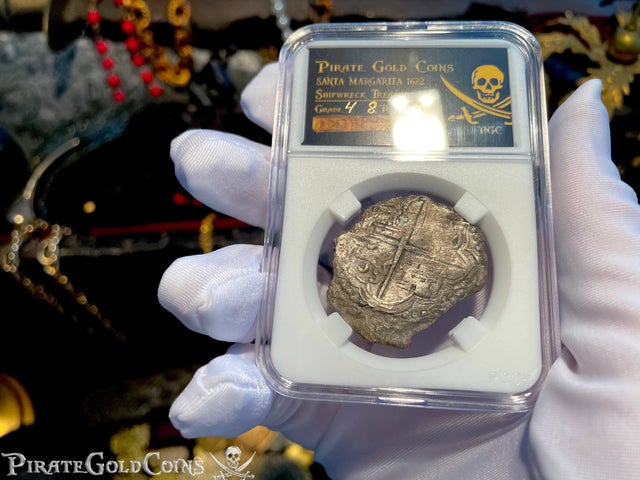 In registered wealth, the Santa Margarita carried 166,574 silver “pieces of eight” treasure coins, more than 550 ingots of silver weighing some 10,000 pounds, and over 9,000 ounces of gold in the form of bars, discs and bits. Additionally, there was contraband — a fortune in “unregistered” treasure having been smuggled on board to avoid paying a 20 percent tax to the Spanish king.

The Santa Margarita also carried riches in the form of copper, silverware, indigo, and personal possessions of officers, passengers, and crew, including medical tools, navigational instruments, gold coins, and precious jewelry of almost unimaginable opulence. Spain and her creditors awaited the arrival of the fleet anxiously; as its return would refresh the royal coffers, repay loans, and lessen the financial pressures that plagued the kingdom. But when news of the fleet arrived, it wasn't good. Subsequent to departing the island of Cuba on September 4, the fleet was overtaken by a rapidly developing storm.

Within days, the Santa Margarita, along with five other ships in the fleet, were wrecked near the Marqueses Keys in the Florida Straits. Drowned were 550 passengers and crew, 142 from the Santa Margarita. Lost was a king's ransom in treasure, a serious setback for Spain, whose supremacy in the world was upheld by the wealth of the Indies. Margarita in Greek means pearl, and the first attempt to find and salvage the Santa Margarita and other fleet casualties was undertaken almost immediately by the Spanish mariner Captain Gaspar de Vargas, who, knowing of their skills, sent for pearl divers — from the island of Margarita — to aid in the search.