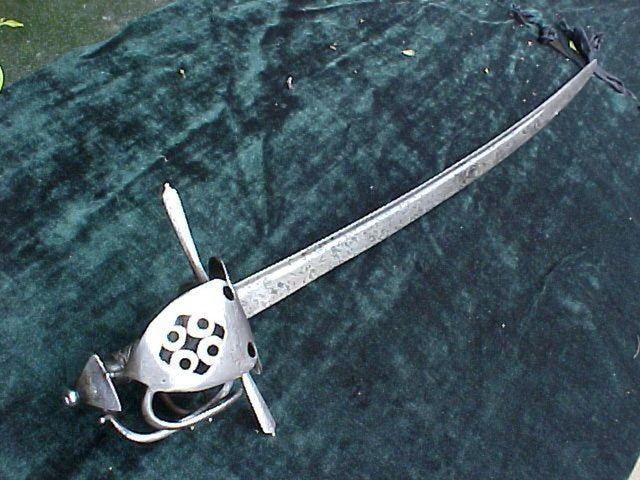 A Very Rare Antique Saber (DUSSAGGE) or SINCLAIRSABEL (SINCLAIR SABER), circa. late 16th century. 31.5" flat broad curved blade w/single fuller w/an unidentified armorer's mark on both sides of the blade. The iron hilt comprising flattened quillons with bulbous terminating ends, half basket pierced guard joined to the knuckle-guard by an S-shaped diagonal bar, a single rounded arm projecting on the leading side and joined to both the rear quillon and the thumb-ring by an inner diagonal, rectangular pommel of flattened pyramidal form, and the grip retaining its original square braided and twisted iron wire grip with turks heads. Patches of light and heavy pitting on surfaces. A fantastic Pirate sword ! Note; This is a rare sword. Swords of this type are frequently refered to as Sinclairsabel (Sinclair Saber), of which many were imported into Norway by Christian IV of Denmark and Norway. These are also referred to as the first forms of the Scottish Basket Hilt. Others are found in a wide number of preserved German and Austrian arsenals, including that at Gratz in Styria. Ref., See; p.385 Swords and Sword Makers of England and Scotland., by Richard H. Bezdek.