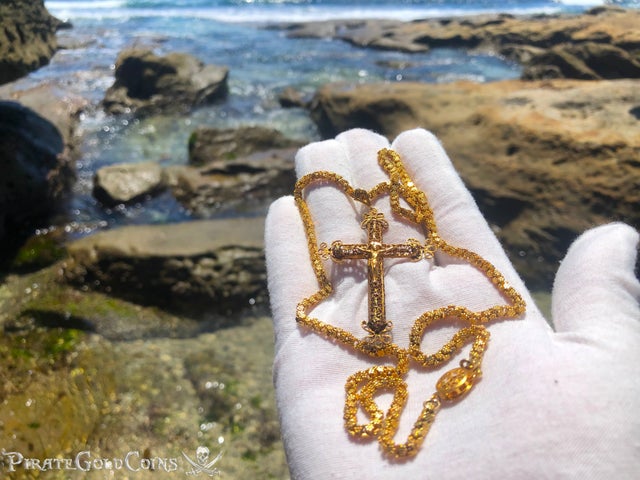 1715 FLEET * GOLD CRUCIFIX & OLIVE BLOSSOM CHAIN 1715 FLEET ARTIFACT ARTIFACT RELIC MONEY CHAIN Approx. 24” and approx. 28gm & (THREE) 3 COA's . Original COA Curator Jack Haskins, Jr. in 1986 (Artifact #00215). COA reflects the chain was made in PERU (very likely INCA Gold), approximately 22kt Gold. The Olive Blossom style chains were created with great care and are of the most "Ornate" Variety. This particular one is in Grade 1 Condition, no kinks, snags or breaks known. The Chains were created in several styles, this particular artifact is of the "6 pedal" style, and is very sought after!1

The Gold CRUCIFIX is approx. 3.6gm of 22kt Gold and measures (6cm x 3.5cm) 2.5" x 1.5" an was created in "Gold Filigree" style, which was an ancient form of jewelry making. The earliest relics of this style come from archaeological digs in Mesopotamia and ate back 5,000 years before the present. It spread from there through India and Turkey and eventually across the Iberian Peninsula. This popular style moved across the Atlantic in the waves of European immigrants came to what was termed the "New World!"

Both of these Artifacts were discovered separately (Crucifix in 1960's by Original founding member John Johnson), and the Olive Blossom Chain was brought up by Jack Haskins, Jr. (Curator & Historical Shipwreck Salvor). There is also an 18 page Appraisal of both relics by the Original Marine Archaeologist "James Sinclair of SeaRex." Sinclair was an Archaeologist on the "1622 Atocha" recovery team as well as on the "1715 FLEET."

The new Queen (Elizabeth Farneese) would not consummate the marriage to King Philip Vth until her Dowry arrived (which is one of the reason the King pressured the Fleet to sail during the Hurricane season), almost immediately after the “War of the Succession” (an almost 15 year war from 1700-1715.