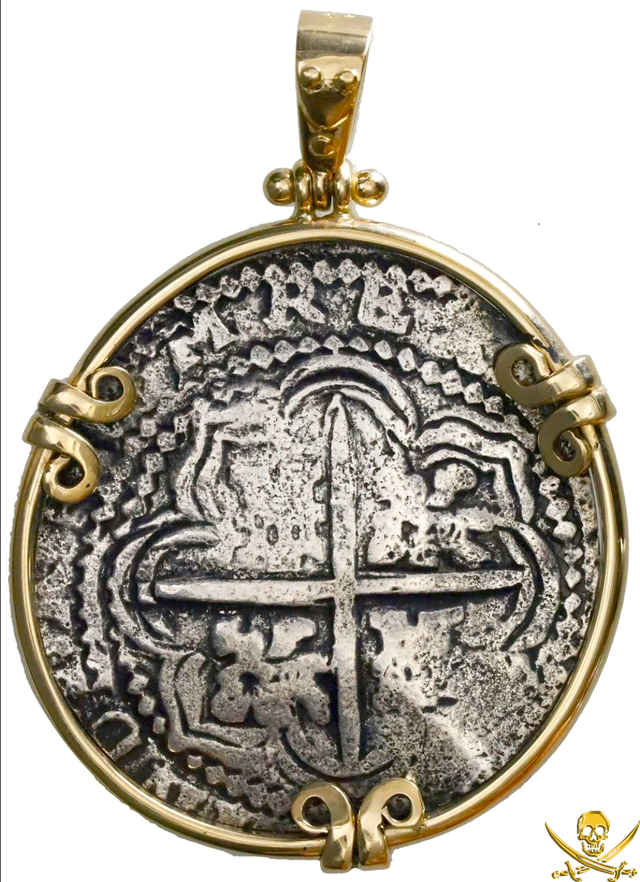 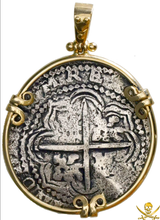 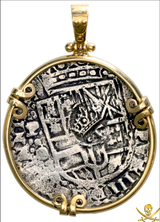 This Authentic 1649 8 Reales set in a 14kt Gold Bezel was found on the Shipwreck CAPITANA of 1654! Total weight 33.43. The Mint mark “P” Potosi is clearly. This piece is way above average, displaying the FULL CROSS and Lions & Castles, as well as the Tressure and partial Crown (not to mention, even the Legends are partially legible). Topped off with a Full Shield and even CROWN (very atypical). READ Below about the Capitana of 1654. 14

On October 18, 1654, the 1200-ton La Capitana I Jesus Maria de la Limpia Conception weighed anchor in Callao, Lima's port city, and Captain de Sossa ordered a course set north for Panama. Built in Guayaquil in 1644, La Capitana measured 130 feet—more than 40 feet longer than any Spanish ship on the high seas. The largest ship built in the Americas, the barrel-shaped galleon was twice the size of the famous Atocha (sunk 1622) discovered by treasure hunters in 1985 near Key West.

On this day, La Capitana carried in her timbered hold a fortune worth a king's ransom in treasure—taxes collected over a two-year period, valuable coins from the counterfeiting scandal that rocked Potosi, and millions of pesos in contraband not listed on the ship's manifest. Not counting the contraband, La Capita-no's cargo in- cluded 2212 silver bars, 216 chests of silver coins, and 22 crates of silver goblets, pitchers, trays, and candelabra. Dangerously overloaded with treasure and six-hundred passengers, La Capitana rode deep in the water, her keel was twenty-four feet below the surface.