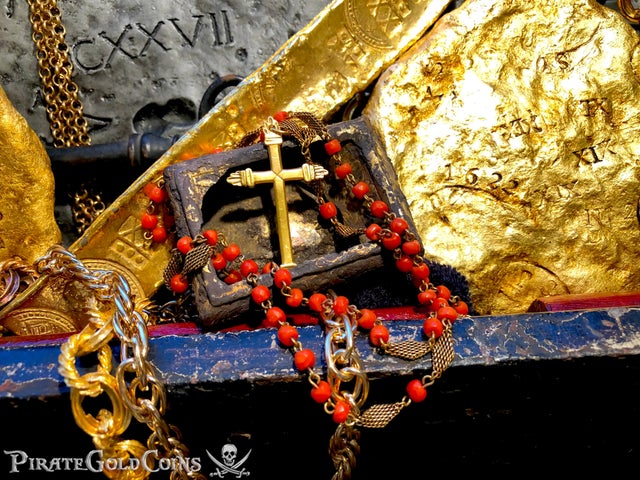 We’ve also posted a Video showing the discovery of several Rosaries enclosed in the “Golden Box,” (see above e pics) along with some Gold / Gemstone Rings (Travel Channel 2003), story below. 1

The Golden Box was discovered near Wabasso, FL (near Turtle Trail) by Mike Maguire (as seen in Travel Channel episode). This Rosary is Religious Jewel. It was believed that Red Coral was a popular constituent and protected against magic spells, going back to Greek mythology, they gave red coral’s it’s origin as “the spurts of Blood that gushed forth when Medusa’s head was cut off by Perseus.” These Rosaries were very popular with SPANISH ROYALS (such as QUEEN JOANNA (JUANA LA LOCA) and were highly prized by Royalty! This VERY ROSARY could very well have been destined for the New Queen (Elizabeth Farnese) King Phiiip’s (V) new Queen, as Philip need a new Queen’s Dowry, required by Elizabeth in order to Consummate the Marriage. Obviously these jewels never made it, but she married him irregardless and provided 7 children (see below for complete 1715 FLEET historical summary). Of course much of the Gold and jewels on these Fleets also belonged to the Church, so this piece may very well have belonged to a Priest or Bishop and or even the Church itself. However, it should be noted much of the “Queen’s Jewel’s” (incredible diamond brooches and earrings) have been recovered near this same area of the Golden Box & Rosary (and rings).

There are known to be perhaps 3 or 4 alike Rosary from the 1715 FLEET in total of which 2 or 3 are reported to have been discovered in the GOLDEN BOX and therefore the Coral beads are NOT oxidized and corroded with barnacles (as the others seem to be), one of which has even been graffitied on the Crucifix, leaving this Very piece to be in the BEST CONDITION our research has uncovered. This piece is similar to the Rosary sold by Christie’s 1988 auction (lot 155), where it sold for $154,000.00