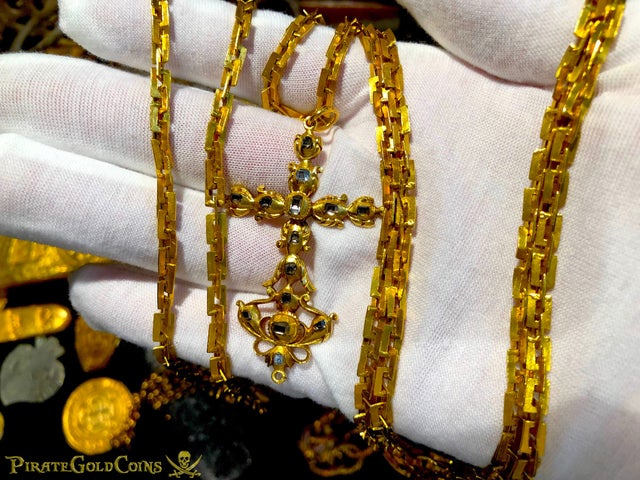 This incredible Artifact was discovered by an Original Real Eight Co. founding member in 1967. It comes complete with both a COA by famed Marine Archeologist (James Sinclair, who worked on the Atocha for self Fisher and recently (9/2019) featured twice on Expeditions Unknown for other famous wreck sites) and a Full Appraisal as well. It is made from 19.8 kt. Yellow Gold, Circa late 1600’s or early 1700’s. It consists of 14 table/Rose cut diamonds and senailles. The total Carat weight of the diamonds is 2.15cwt. The total weight of the Cross and diamonds is 11.8gm and measures 6cm x 3.5cm (2.5” x 1.5”), approximately.

In July 1993, Christopher James (Bob Weller’s Team), a diver (and Bob's partner) working on the site of the Cabin wreck (not from their ship the Pandion, but Free roaming) began to find jewelry that was beyond stunning, including Two Gold and Diamond Brooches (matching this Cross), one of the brooches is in the shape of a Butterfly with open wings and the other is an Oval brooch (see attached pics), along with two studded earrings, in the shape of pineapples in all more than 400 diamonds were included in the set. Other items included Gold Rings, and the “Gold Dragon.” Christopher has confirmed that he does believe this piece (matching Diamond Cross) belongs to the jewelry set he discovered (featured on A&E) in 1993!

Queen’s Jewels: As the “War of the Succession” raged on (also known as Queen Anne’s War) from 1700 to 1715 (until the Treaty was signed), King Philip V lost his beloved Queen consort, Maria Teresa. It was imperative for Philip V to find a new Queen in order to cement the relationship of the Burbon Dynasty in Spain. Due to the importance, it was carefully strategized and the arrangement was made to solidify the Union for both family and political dynastic concerns. The Choice, Elizabeth Ordordo Farnese, daughter of the hereditary prince of Parma. This union took place on December 24th by proxy, Elizabeth was 22 and Philip V, then 31. HOWEVER, Elizabeth would not consummate the marriage and she received her dowry ~ the Queen’s Jewels. World went out and artisans rushed to create jewels unlike any known before! These jewels were loaded onto the Capitana of the 1715 FLEET, the Nuestara Señora del Carmen. There were 8 Chests jewels that were loaded under the watchful eye of the Admiral himself, Capt. Ubilla, and all 8 Chests were lost that day (including the Admiral and his son) on July 31, 1715, at approx. 2am.

There have been crosses found on many Spanish Shipwreck sites, but few can match the exquisite beauty and eloquence of this object. It’s connection to a larger jewelry objects (1992 brooch and earring set) have matching style and personalities that were part of the Original Real Eight Corporation. Featured in the book “Treausres of the Spanish Main” by John Christopher Fine (2006) pg 138 & 139 clearly exemplify these matching styles (brooches and earrings) with this Gold & Diamond Cross.