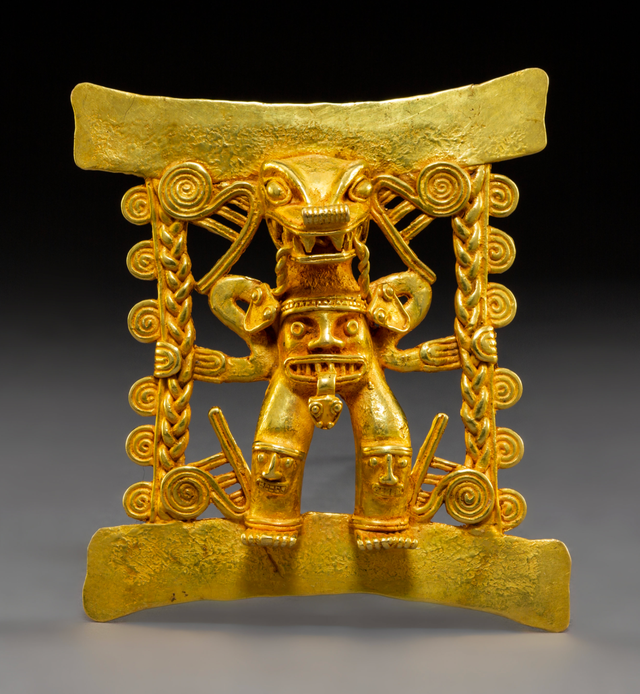 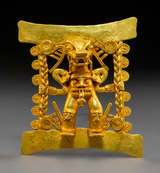 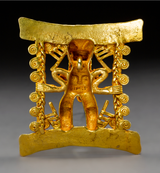 THE CONQUEST OF COSTA RICA

In their quest to confiscate as much gold as possible, Conquistadors looting Mexico in the name of Fernando II of Aragon (Cortez invaded Mexico 1519-1521) sent Pedro De Alvarado south in 1523 to subdue Guatemala - the "department" under Spanish governance that included Guatemala, Costa Rica, El Salvador, Nicaragua and a few other bits of central America. Alvarado pushed into El Salvador in 1524, the same year that Francisco Hernandez de Cordoba pushed north from Panama with the intention of colonizing Costa Rica and Nicaragua. The converging groups of Conquistadors clashed, believing that there must be a lot in the region worth fighting over, but they were wrong. The entire Central American region was nowhere near as rich in gold and silver as were Mexico, Colombia and Peru, and THIS is the reason that the Guatemala department never produced anything approaching impressive quantities of gold escudos for the Spanish crown. This explains the rarity of colonial Guatemalan escudos to this day.

The principal reason why there is relatively little gold in Central America is geological - a matter of plate tectonics. Much of Central America consists of uplifted land that is part of the “Caribbean Plate”, a thick oceanic section of the Earth’s crust that is less dense and more gold-poor than most continental tectonic plates. It is being uplifted by the subduction of the “Cocos Plate”, a thinner oceanic plate slowly moving north-east at the edge of the Pacific. The heat of friction from this subduction causes the volcanism that is prevalent in Central America – Costa Rica is riddled with volcanos - and generally speaking, magma is a poor source of heavy metals like gold.

This doesn’t mean that there wasn’t gold in Costa Rica. Originally it was plentiful. However, Costa Rica is only the size of Maryland and, after the better part of a millennium of mining, what gold that was left wasn’t easy to get at. Most native gold in Costa Rica is “alluvial,” existing as nuggets and flakes eroded from their original strata by streams and rivers. The indigenous people of the region “panned” for gold using wooden boxes or dried gourds in a way similar to how shallow metal pans have been used in modern times. The gold so obtained only partially satisfied the growing local demand for “liquid sunshine” or “the tears of God”, however, and much of the gold used in Costa Rica came into the region from Mexico and Colombia in exchange for pottery, textiles and agricultural products. This was particularly the case by the time the Conquistadors arrived – the deceptively bountiful gold displayed by the natives that greeted Columbus and that led to Costa Rica being named the “Rich Coast” was by that time largely imported.

Although there is some speculation that seafarers from Polynesia actually made it to South America, there is no DNA evidence that their descendants survived to the present, nor is there any archaeological evidence to that effect. That leaves the conventional wisdom in place - that all indigenous New World peoples descended from the Eastern Siberian and Northern Chinese migrants who crossed the Bering Land Bridge at the end of the last Ice Age between thirteen and fifteen thousand years ago. This migration left behind enough archaeological evidence to establish that large numbers of people were involved and that when they came, they spread across the hemisphere fairly quickly. It has been established by analyzing the DNA of skeletal remains that there were actually three distinct waves of migration from Siberia and Northern China into South America, the first occurring between 11000 and 15000 years ago, the second around 9000 years ago, and the third, smaller influx occurring around 4200 years ago. These dates set valid dates for the initial inhabitation of Central America, there being no other convenient through-route. By 1000 BCE, there were permanent settlements scattered throughout what is now Costa Rica.

The various settlers were at first hunter-gatherers, but later developed agriculture and animal husbandry which, in turn, allowed for greater vocational specialization and social stratification within the population. In Meso- and South America, populations assembled into larger groups - the Aztecs and the Maya in Mexico and the Incas in Peru built empires, but the tribes that settled in Central America remained more locally organized into relatively smaller chiefdoms. This was the case in the Diquis River Delta and in the surrounding areas. The decentralized nature of Central American life made it much more difficult for the Conquistadors to subdue the indigenous population of this region, and the tropical rainforest into which the smaller groups easily disappeared when attacked or pursued didn’t help.

The Aztec and Incan Empires had concentrated their power and wealth into large population centers that made them easy targets, and within ten years of the arrival of Conquistadors, those empires had disintegrated, but it took another thirty years for Central America to come comfortably under Spanish control and, relatively speaking, it wasn’t worth the effort. In the end, it wasn’t so much the military might of the Conquistadors that decimated the indigenous populations of the region as it was smallpox, measles and the other European-borne pathogens that Native Americans had developed no resistance to. By the end of the 16th century, the native populations exposed to the Conquistadors were reduced by 93%, and those native to Costa Rica were gone.

Unfortunately, details of all pre-colonial life in the Americas are prehistoric, there having been no written language to record events and only glyphic representations among the Mayan and Aztec peoples. What little can be found in the written record dating back to the time of the Conquistadors came from the Spaniards’ own accounts of their colonial adventures, the sense of which cannot be taken as impartial. However, their accounts of the processes being used by native 16th century metallurgists are likely accurate as far as they go, and those techniques probably had not changed much over the course of Diquis Tumbaga artifact manufacture.

Many of the technical aspects of gold-working arrived in the Diquis region of Costa Rica around 500 CE, having spread northward from Andean South America. One important technique did not make that journey, however, and that was - aided by the use of bellows - the ability to melt and pour either pure gold or pure copper. The problem was that pure gold melts at a temperature considerably higher than its alloys’ melting points. Native goldsmiths in Costa Rica got around that problem by finely dividing native gold and adding copper salts, creating mixtures that their furnaces could melt without the aid of bellows.

Native gold usually occurs in the 80 – 97% pure gold range, with the remainder consisting of varying amounts of copper, silver and a handful of other trace metallic elements. When copper was added in excess of the naturally occurring proportion, the resulting alloy was called “Tumbaga”. (The term “Tumbaga” dates at least as far back as the early 1700s, and was likely derived from the word “tuob,” a word for gold that used by some natives in the early 1500s.) Some Tumbaga artifacts contain only a few percent of gold, while others assay as high as 97%. Generally, the color and luster of a piece is a good indication of its gold content.

There is strong evidence that some Tumbaga pieces were “depletion-gilded”, a process of surface-purity-enhancement in which an item composed of Tumbaga-alloy is first roasted at high temperature to oxidize the alloy’s copper, and then soaked in acid (many vegetable-based organic acids were readily available) to dissolve the oxides. The much less reactive surface gold that remains after such a treatment is grainy and has the appearance of ground curry, but is essentially pure and can be easily burnished to achieve a shiny, pure gold appearance. The Crocodile God pendant may have been treated in this manner to achieve its particularly rich golden hue.

Gold Tumbaga artifacts were either cast by the “lost wax” process or hammered. Casting was the preferred method in pre-Colombian Costa Rica, and micrographic analyses of pendants such as this one suggest strongly that they were cast as a single unit, modeling the form with beeswax and using an elaborate assembly of vents to allow gases to escape as the mold was being filled with molten gold. Artifacts fashioned from Tumbaga alloys are fairly plentiful, many thousands of examples having survived the Conquistadors’ efforts to locate them. Many have weathered poorly or otherwise offer nothing to excite either art collectors or technical scholars, and such are sometimes scrapped for their metal content. This piece represents the exception. Note that much silver was also confiscated by the Conquistadors. The collected silver artifacts also had augmented copper content and were also called “Tumbaga”. The so-called “Tumbaga” wreckage of 1528 off the coast of Bermuda yielded over 100 silver “Tumbaga” ingots.

In Pre-Columbian cultures, gold epitomizes the “aesthetic of brilliance.” “Light” is a direct manifestation of God, the “Shining One.”

In Central America, wearing gold was an advertisement of power through association with God, a ritually significant religious symbol of elite status. Specific item details communicated individual preferences for particular Gods, though most Gods were animals that had the power to bite or poison humans. Stylistic differences between individual items help identify likely regions of manufacture, but there also exists an important iconographic consistency across the region that speaks to a common cultural heritage - so much so that frequently encountered symbols can be taken to communicate a broadly shared religious belief.

Anthropomorphic figures that combine animal heads and human bodies are thought to represent deities in Pre-Columbian art. This artfully conceived and carefully executed Tumbaga pendant features an exceptionally well-crafted crocodile-headed human figure, and would have been worn by an unusually powerful chief or shaman.

Crocodiles in Pre-Columbian mythology are associated with rulership and fertility. The Earth was thought in some circles to have grown like a tree from the scales of a crocodile, the concept of “World Tree” tracing all the way back to North-Eastern Siberia.

Snakes were seen as irresistible progenitors, presumably for their resemblance to the shape of the male reproductive anatomy.

The braided snakes held in the crocodile’s clenched teeth are a rare Tumbaga pendant feature, just as intriguing as the snake’s head that represents both the abdominal face’s tongue and the body’s penis. The human face on the body suggests multiple meanings, while the faces below the knees are a particularly rare highlight. It has been speculated that leg ligatures (constrictions just below the knees meant to swell the calves) in some way empower the warrior with the female ability to bring forth life (the swollen calves appearing pregnant), and the small faces seen on the God’s shins might well symbolize the next (fetal) step in the exercise of that power. Also note the crocodile heads (stylized) seen up-side-down at the God’s feet and right-side-up beside the God’s head. Finally, the horizontal bars above and below the Crocodile God symbolize Pre-Columbian versions of Heaven and Hell, the Crocodile God occupying the Earthly realm between them and powerfully holding them apart.

That there is symbolism here in abundance is without doubt, the questions left unanswered giving this important piece of pre-Colombian art the artist’s most coveted gift – the communication of captivating ideas and powerful emotions that sustain our interest and color our dreams.

Enrique Vargas Alfaro, 1960s. Mr. Alfaro worked out of San Jose, Costa Rica, and sold many fine articles of Pre-Columbian art to prestigious collections and museums in the United States. He is the named source for items in the Smithsonian’s National Museum of the American Indian, The Denver Art Museum, the William C. Carlos Museum, and in numerous private collections.