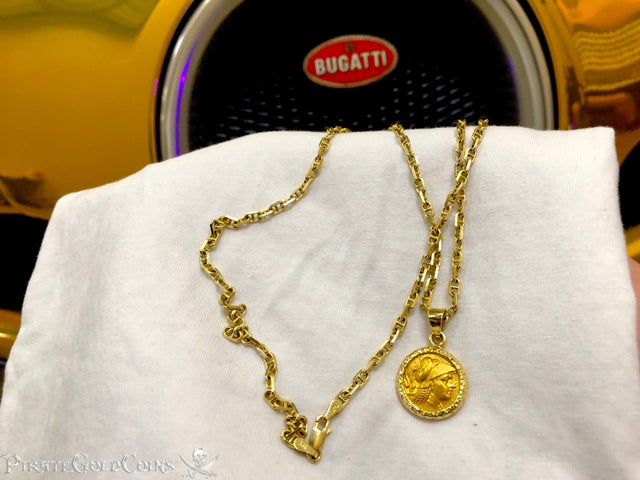 Incredible condition for 2,350 YEARS OLD!!! THIS PIECE HAS THE MUCH SCARCER "FLOWING HAIR" and INCREDIBLE CENTERING, DETAIL AND REALLY RICH GOLDEN LUSTER FOR COLOR! ALEXANDER THE GREAT.xx

~ Born in Pella in 356BC, took the throne at age 20, after his father Philip II (see other Philip II coins we have in our store & site) in 336BC after watching his father being murdered in Amphitheater (ordered by Alexander's mother). He spent most of his ruling years on an unprecedented military campaign through Asia and northeast Africa, until by the age of thirty he had created one of the largest empires of the ancient world, stretching from Greece to Egypt and into northwest India.

He was undefeated in battle and is considered one of history's most successful military commanders.

ALEXANDER was tutored by the philosopher "ARISTOTLE" until the age of 16. Seeking to reach the "ends of the world and the Great Outer Sea", he invaded India in 326 BC, but was eventually forced to turn back at the demand of his troops. Alexander died in Babylon in 323 BC, the city he planned to establish as his capital, without executing a series of planned campaigns that would have begun with an invasion of Arabia. In the years following his death, aseries of civil wars tore his empire apart, resulting in several states ruled by the Diadochi, Alexander's surviving generals and heirs Alexander's legacy includes the cultural diffusion his conquests engendered, such as Greco-Buddhism.

He founded some twenty cities that bore his name, most notably Alexandria in Egypt. On either 10 or 11 June 323 BC, Alexander died in the palace of Nebuchadnezzar II, in Babylon, at age 32. There are two different versions of Alexander's death and details of the death differ slightly in each. Plutarch's account is that roughly 14? days before his death, Alexander entertained admiral Nearchus, and spent the night and next day drinking with Medius of Larissa. He developed a fever, which worsened until he was unable to speak. The common soldiers, anxious about his health, were granted the right to file past him as he silently waved at them. In the second account, Diodorus recounts that Alexander was struck with pain after downing a large bowl of unmixed wine in honour of Heracles, followed by 11 days of weakness; he did not develop a fever and died after some agony. ATHENA ~ Athena had a special relationship with Athens, as is shown by the etymological connection of the names of the goddess and the city. According to mythical lore, she competed with Poseidon and she won by creating the olive tree; the Athenians would accept her gift and name the city after her. In history, the citizens of Athens built a statue of Athena as a temple to the goddess, which had piercing eyes, a helmet on her head, attired with an aegis or cuirass, and an extremely long spear. It also had a crystal shield with the head of the Gorgon on it. A large snake accompanied her and she held Nike, the goddess of victory, in her hand.