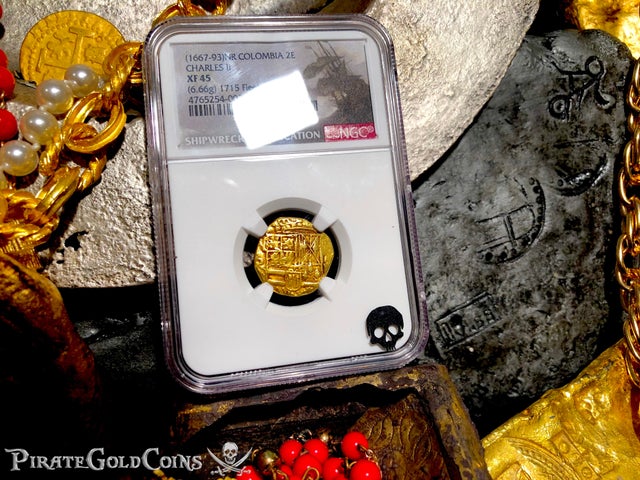 Colombia 2 Escudos 1667-93 "Charles II" NGC 45 “ 1715 FLEET shipwreck!” (Nuevo Reino mint, KM14.1,Fr-3) Deep rich Gold color! Couldn't really ask for a better cross ~ Struck VERY Boldly / Deep, and very well Centered as well. This piece has deep toning, creating that "pirate era" look to the coin. Of course, Charles II died in 1700, and on his death bed gave his reign to his grand nephew “Philip V” which Sparked the great “War of the Succession!” This in turn is what created the “1715 Plate Fleet” shipwrecks in July 1715. 17

Charles was one of the most popular and beloved kings of England, known as the Merry Monarch, in reference to both the liveliness and hedonism of his court and the general relief at the return to normality after over a decade of rule by Cromwell and the Puritans. Charles's wife, Catherine of Braganza, bore no live children, but Charles acknowledged at least twelve illegitimate children by various mistresses. 17 The 1715 Treasure Fleet was a Spanish treasure fleet returning from the New World to Spain.