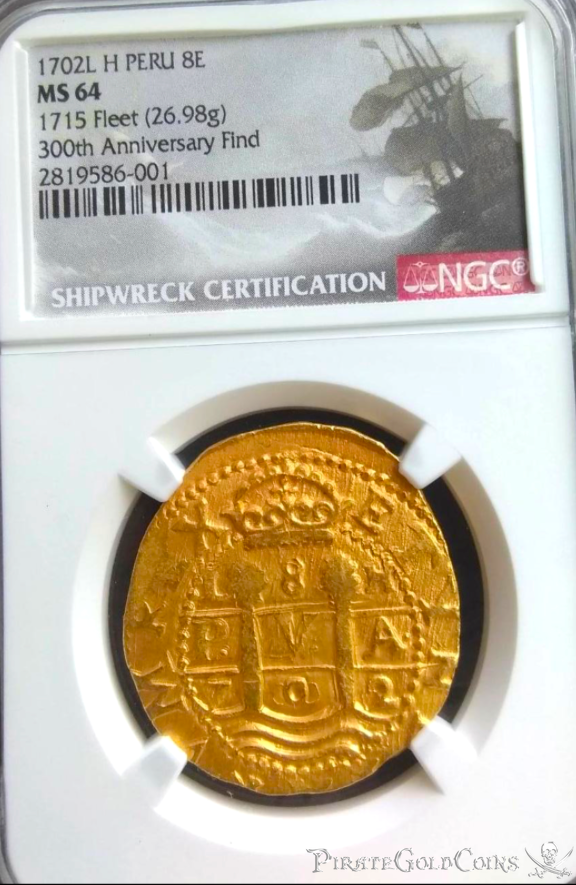 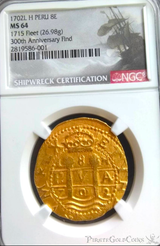 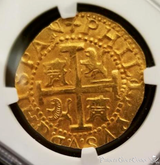 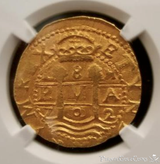 PERU 1702 8 ESCUDOS NGC 64 1715 FLEET SHIPWRECK PIRATE GOLD COINS COB RARE ~ POP 6 Total, ONLY 1 in NGC 62 and 2 higher!!! But what’s most amazing about this piece is the FULL CROWN and Reverse Legends, as well as the CROSS! The Cross is VERY BOLDLY struck and thick! The Castles and Lions are strongly struck as well, NO doubling on these devices either. The Size is the LARGE Planchet version. But, Legends Legends legends!!! The inner & outer Dots surrounding the Cross are incredible! The Cross Above the Cross and the King’s Ordinal (Philipus V) D.G. HISPA (KING PHILIP V of SPAIN by the Grace of God). The color is almost blinding, simply beautiful! Extremely RARE Shipwreck Gold Doubloon from the 1715 FLEET! (full weight at 26.98gm)bp

Two of the 1702's were recovered July 31st 2015 from the wrecks tie of the Fleet Almirante, Santo Cristo de San Roman. With Salvor's photo certificate! Also, there Original REAL 8 Partner Bob Johnson reported finding a pair of 1702 Lima's on Douglas Beach (Memorial Day) 1964, inside a disintegrated chest of Lima and Mexican Gold Cobs. It wouldn't be until another Half Century passed by until Queen's Jewels located this beautiful MS 64!