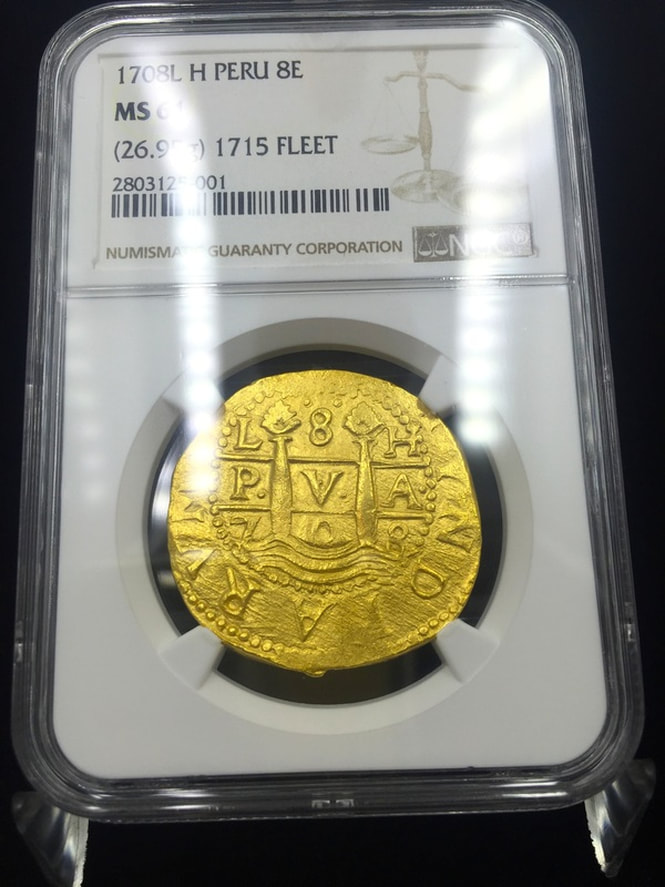 Click above image to view in eBay store
Description - with COA Cobb Co / Mel Fisher ! PERU 1708 8 ESCUDOS “1715 PLATE FLEET”  ~ NGC 61 ~BEAUTIFUL BRIGHT LUSTER ON THIS DOUBLOON! ** See the attached comp of the FINEST KNOWN 62 that we call a "TRAIN WRECK!"
PERU 1708 8 ESCUDOS DOUBLOON NGC 61  2nd FINEST KNOWN!  THE FINEST KNOWN IS A 62 ONLY ONE GRADE POINT HIGHER. VERY RARE ~ ONLY 5 EVER GRADED!
THIS DOUBLOON COB IS EXTREMELY ROUND FOR BEING HAND STRUCK AND HAS EXCELLENT CENTERING AND NICELY STRUCK DATE! THIS BEAUTIFUL DOUBLOON IS FROM MTHE FAMOUS 1715 PLATE FLEET SHIPWRECK!
THIS PIECE COMES WITH A FULL COA FROM MEL FISHER & THE COBB COIN CO. ~ SEE ATTACHED PHOTO
​ (read more on the 1715 Plate Fleet Shipwreck below)