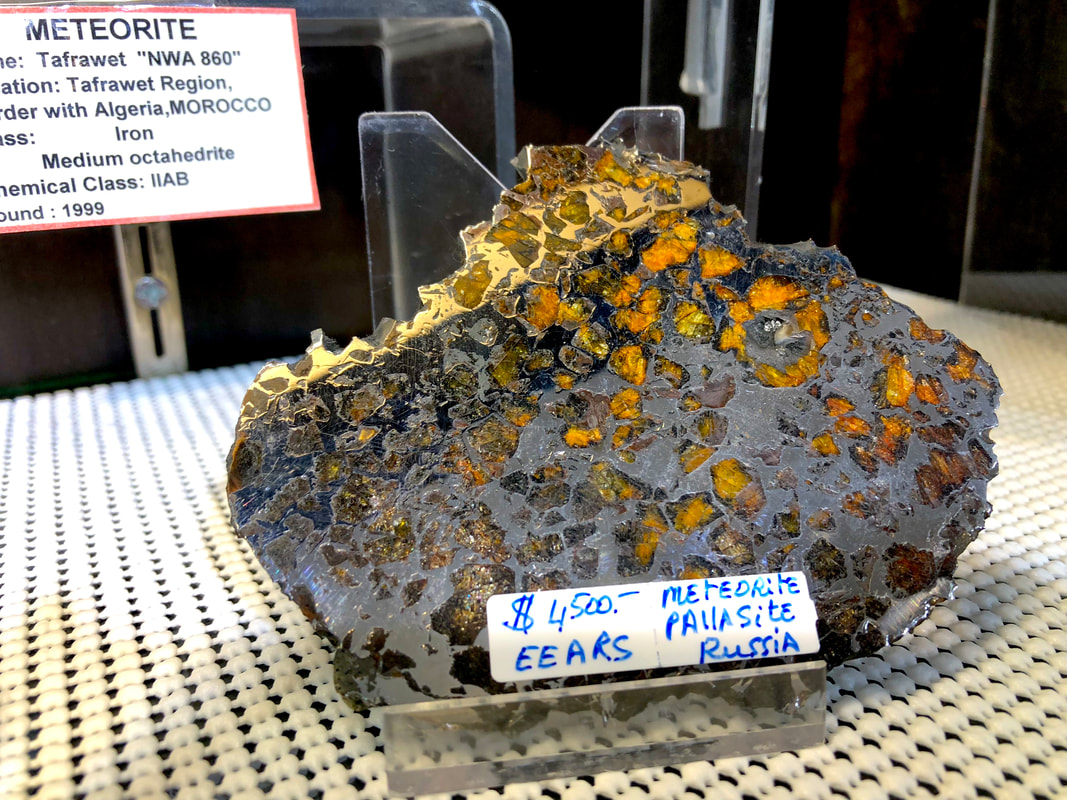 Click above image to view in eBay store
Pirate Gold Coins Treasures of Space: Meteorite Slice Pallasite
Esquel is a meteorite found near Esquel, a patagonian town in the northwest part of the province of Chubut in Argentina. It is a pallasite, a type of stony–iron meteorite that when cut and polished shows yellowish olivine (peridot) crystals. In 1951 a farmer uncovered a meteorite in an unknown location near Esquel while digging a hole for a water tank. The meteorite was purchased from the finders and taken to the United States in 1992 by meteorite expert Robert Haag. The Esquel pallasite is known worldwide among collectors and the meteoritical scientific community. Esquel is regarded as one of the most beautiful meteorites ever found and is also one of the most desirable pallasites among meteorite collectors. It is a main group pallasite (MGP). (info from Wikipedia)
A meteorite is a solid piece of debris from an object, such as a comet, asteroid, or meteoroid, that originates in outer space and survives its passage through the atmosphere to reach the surface of a planet or moon. When the object enters the atmosphere, various factors such as friction, pressure, and chemical interactions with the atmospheric gases cause it to heat up and radiate that energy. It then becomes a meteor and forms a fireball, also known as a shooting star or falling star; astronomers call the brightest examples "bolides". Meteorites vary greatly in size. For geologists, a bolide is a meteorite large enough to create a crater. Meteorites that are recovered after being observed as they transit the atmosphere and impact the Earth are called meteorite falls. All others are known as meteorite finds. As of August 2018, there were about 1,412 witnessed falls that have specimens in the world's collections. As of 2018, there are more than 59,200 well-documented meteorite finds. Meteorites have traditionally been divided into three broad categories: stony meteorites that are rocks, mainly composed of silicate minerals; iron meteorites that are largely composed of metallic iron-nickel; and stony-iron meteorites that contain large amounts of both metallic and rocky material. Modern classification schemes divide meteorites into groups according to their structure, chemical and isotopic composition and mineralogy. Meteorites smaller than 2 mm are classified as micrometeorites. Extraterrestrial meteorites are such objects that have impacted other celestial bodies, whether or not they have passed through an atmosphere. They have been found on the Moon and Mars.