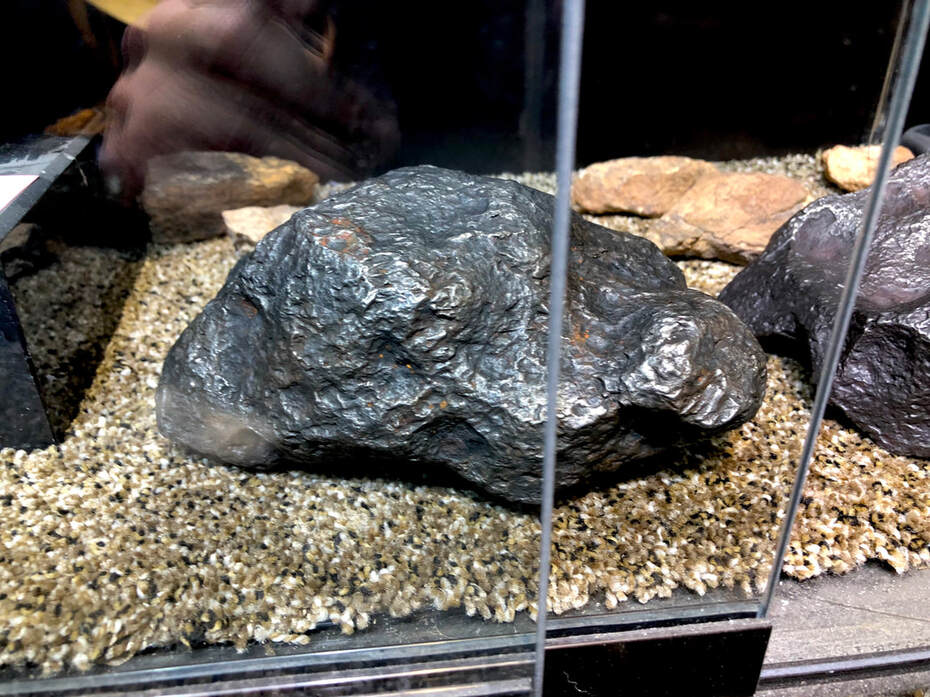 Click above image to view in eBay store
Pirate Gold Coins Treasures of Space: Meteorite from Campo del Cielo (Sticker $21,000) This meteorite has well formed thumb-prints produced by intense heat and aviation as it passed into and through earth's atmosphere.
Camp Del Ceilo mdteorites are classified as coarse iron octahedrites, type IAB. This meteorite fall occured between 4000 and 6000 years ago. The first record of its discovery was in 1576 by a Spanish CAptain named Miravel, although the actual fall is believed to have been witnessed by local Indians who originally named this region the "field of heaven." The Gran Chaco is located in the center of South America. It partially embraces the south of Bolivia, Paraguay and the nothestern Argentina. It is a sedimentary plain covered with parks and subtropical savannas. The soil, free of stones, is composed of layers of sand and mud. Inside the Gran Chaco, to the south of the Argentinean provinces of Chaco and Santiago del Estero, is the meteoric dispersion of Campo del Cielo. This was originated by the impact of big metallic meteoroid, probably about 5800 years ago. The peculiar characteristics that it presents (size and alignment of the craters, great mass and high content of iron of the fragments, etc.) have gotten the attention during a lot of time. The knowledge of this event that pre-Columbian inhabitants possessed is usually mentioned. This is acceptable if we consider the attraction that the celestial phenomenons have alwasy exercised on the man, in particular one that as this should have had cataclismic proportions. For these reasons, it is important to settle down on firm bases the reaches of the impact of this disperion on the indian cultures of the Chaco.
A meteorite is a solid piece of debris from an object, such as a comet, asteroid, or meteoroid, that originates in outer space and survives its passage through the atmosphere to reach the surface of a planet or moon. When the object enters the atmosphere, various factors such as friction, pressure, and chemical interactions with the atmospheric gases cause it to heat up and radiate that energy. It then becomes a meteor and forms a fireball, also known as a shooting star or falling star; astronomers call the brightest examples "bolides". Meteorites vary greatly in size. For geologists, a bolide is a meteorite large enough to create a crater. Meteorites that are recovered after being observed as they transit the atmosphere and impact the Earth are called meteorite falls. All others are known as meteorite finds. As of August 2018, there were about 1,412 witnessed falls that have specimens in the world's collections. As of 2018, there are more than 59,200 well-documented meteorite finds. Meteorites have traditionally been divided into three broad categories: stony meteorites that are rocks, mainly composed of silicate minerals; iron meteorites that are largely composed of metallic iron-nickel; and stony-iron meteorites that contain large amounts of both metallic and rocky material. Modern classification schemes divide meteorites into groups according to their structure, chemical and isotopic composition and mineralogy. Meteorites smaller than 2 mm are classified as micrometeorites. Extraterrestrial meteorites are such objects that have impacted other celestial bodies, whether or not they have passed through an atmosphere. They have been found on the Moon and Mars.