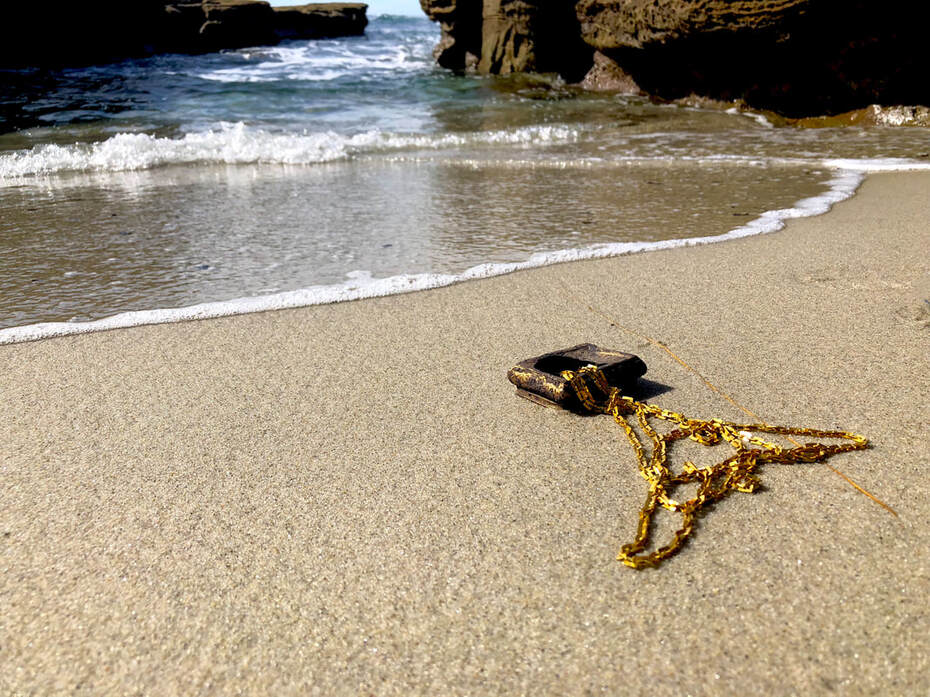 Click above image to view in eBay store
GOLD CHAIN 66” SHIPWRECK TREASURE 1656 “MARAVILLAS” MONEY CHAIN PIRATE GOLD COINS
This Almost 6 FOOT GOLD CHAIN is comprised of rectangular shaped links (3/16” each in length) of a Very Bright (high Kt weight, 74.47 grams) Gold, with openings to link together. W/ 2 COA’s! From the Shipwreck “MARAVILLAS of 1656” off the GRAND BAHAMA ISLAND (see Below). We also have a BAR & Gold COIN (1623 in MS 61) offered in our store from the MARAVILLAS as well!
MONEY CHAINS (since jewelry was NON-taxed by the King), were commonly used for Daily trade between Merchants and privateers alike. They would simply break off as many Links as needed to conduct business and do deals. This particular piece was most likely previously on the 1654 Capitana as well, since that sunken Galleon’s Treasure was loaded onto the 1656 Maravillas, which is why the 1656 MARAVILLAS is thought by many to be the LARGEST SHIPWRECK TREASURE ever to set sail from the New World!
The“MARAVILLAS” fleet was homebound for Spain in January 1656 (Nuestra Señora de las Maravillas), which was officially filled with over 5 million Pesos of Treasure Plus all the Contraband. This Galleon carried much of the Treasure from the 1654 Capitana Shipwreck that wrecked off the Chanduy Reef off Ecuador. This Cursed Treasure fell the depths of the Ocean floor once again on the Maravillas after it ran into shallow waters and was subsequently rammed by one of the other Galleons in its own Fleet, forcing into on a nearby reef on Little Bahama Bank off Grand Bahama Island. Almost all of the 650 people died that night and the wreck was scattered. Still over half of the Treasure is unfound. Then in the 20th century Robert Marx once again located this Shipwreck (and his co. Seafinders in 1972 and his finds were offered in the Famed 1972 Schulman auction (as well as in 1974) in New York.