Only Pair French Naval Flintlock Swivel CANNONS in the World 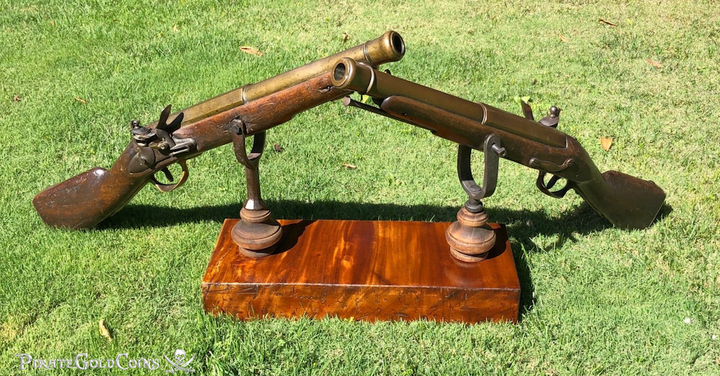 Click above image to view in eBay store
To my knowledge, this is the only (PAIR) of French Naval Flintlock Swivel Cannons (Espingoles) we have seen in or outside a Museum... Most certainly the only pair for sale in the world! There is (1) example known in the Musee de la Marine at Toulon. (The wood display block has recently been made for these guns.)

Espingoles of the American Revolutionary period

37 French, with round, 28" brass barrel and 1.25" straight cylindrical bore; the barrel is stepped in the middle and has a cannon muzzle. The furniture is brass. The lock is inscribed "St. Etienne" and bears an inspection mark dating the gun between 1777 and 1784. The top of the barrel is inscribed with a small anchor. Overall length 43". (Drawing from Boudriot's draft of the specimen at the Musee de la Marine at Toulon.)

Spanish, with round, wrought iron barrel widely flared at muzzle to 4.0" bore. The miquelet lock reflects the Spanish preference for this older style over the flintlock proper. The bottom of the stock is stamped with an anchor over "MAH." The foreshock is reinforced with a 4" wide iron band at the swivel attachment and the swivel yoke is rudimentary, with no pinion collar. Overall length 42". (Courtest of Richard A. Bourne Co., Inc.)

British, with 28" brass barrel of straight, 1.2" bore very slightly swollen at the muzzle to 1.68". The brass furniture is of classic sea service style; the barrel bears Board of Ordnance proofs, the lock is marked "TOWER" with George III cypher and issue mark, and the stock has a storekeeper's stamp on the wrist behind the lock.
American, with 30 1/2" round iron barrel gradually flaring to 2.6" at muzzle. The stock is of blackened maple; the crude, flat lock is of colonial manufacture but carries a contemporary Brown Bess cock which was fitted during the gun's period of use. No marking are in evidence anywhere, overall length 44". 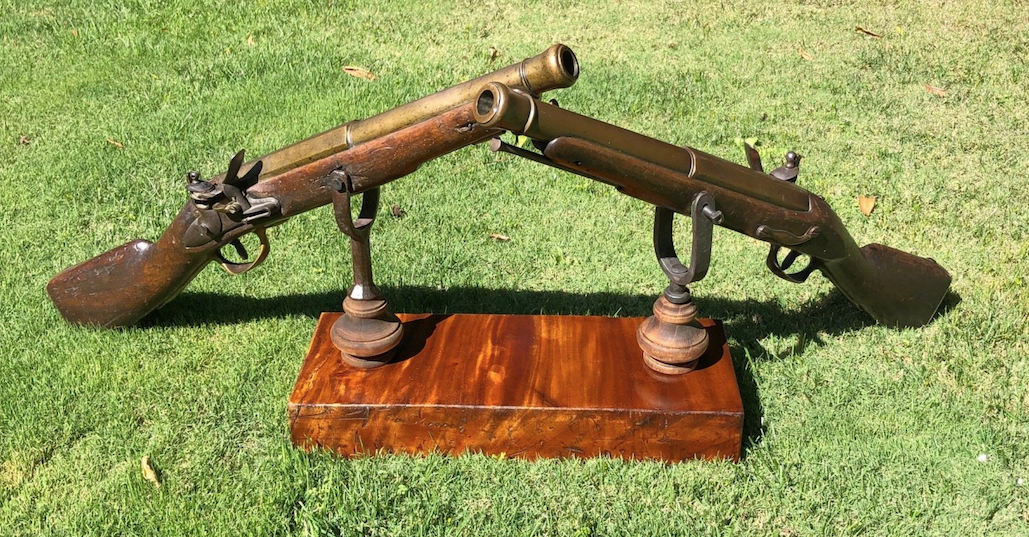 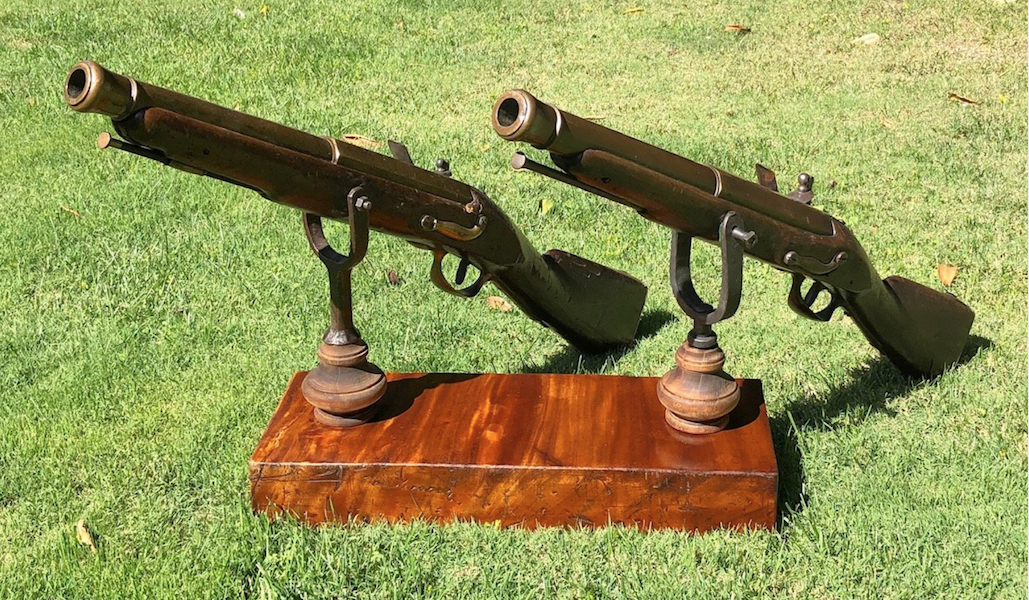 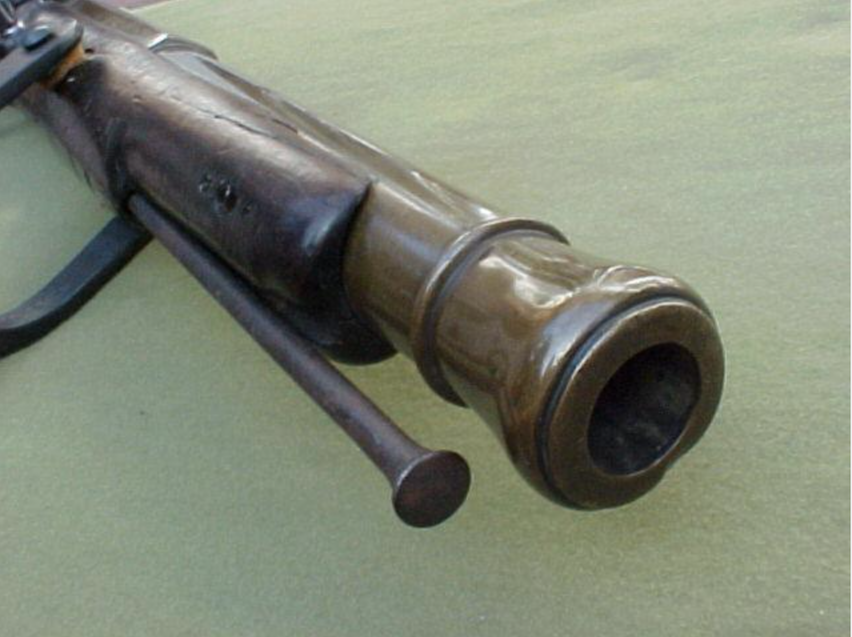 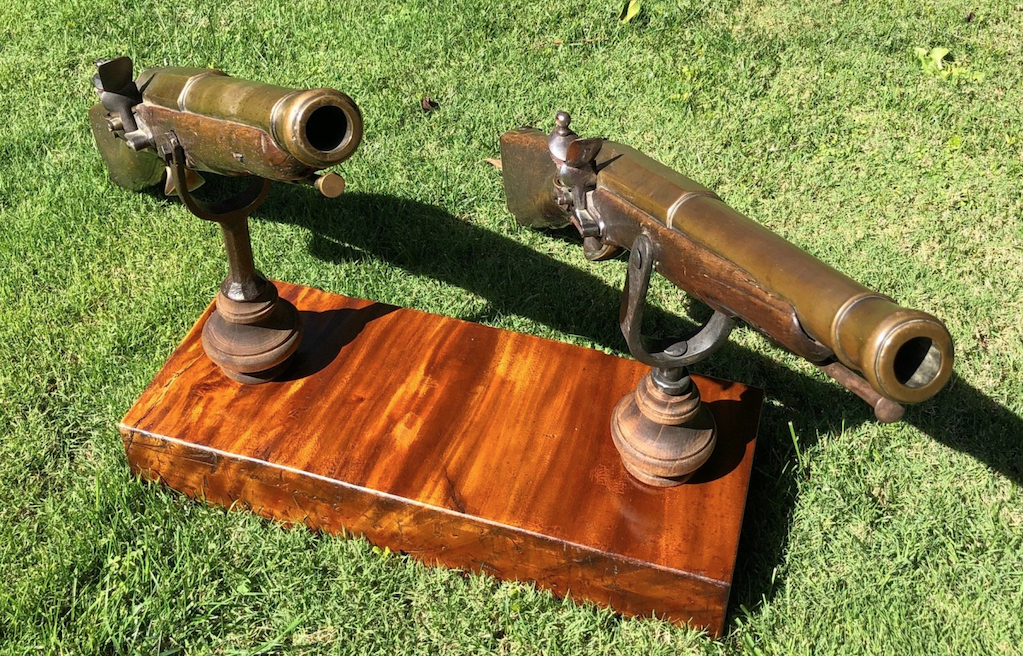 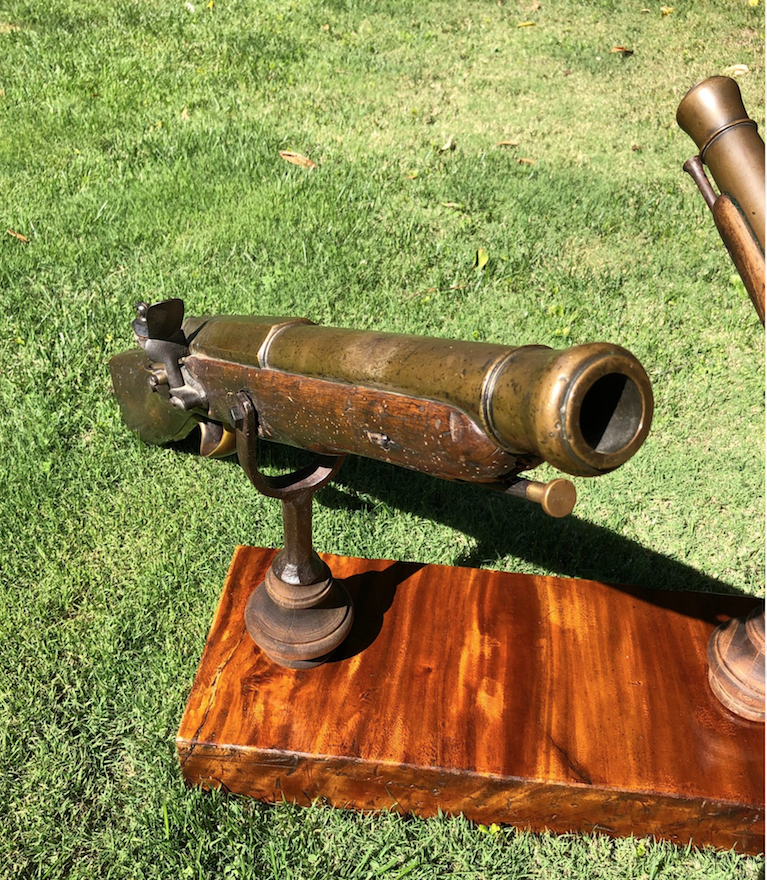 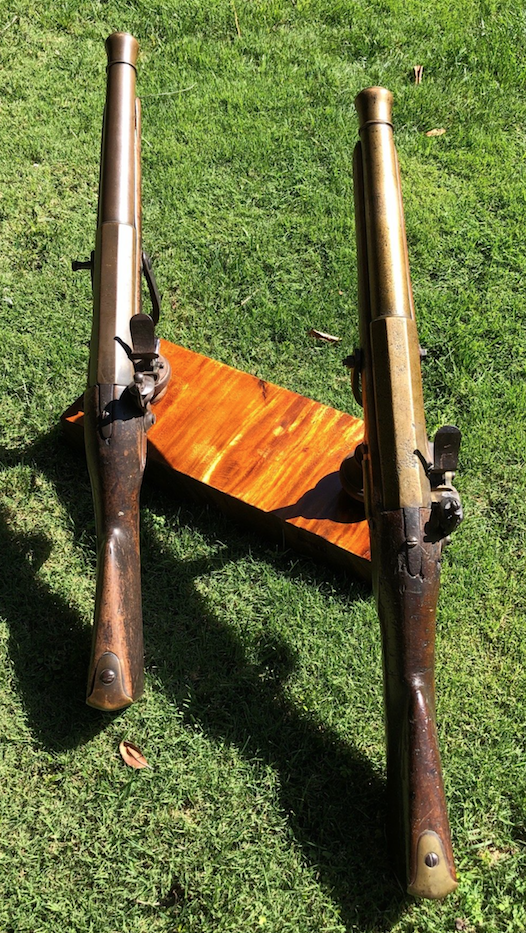 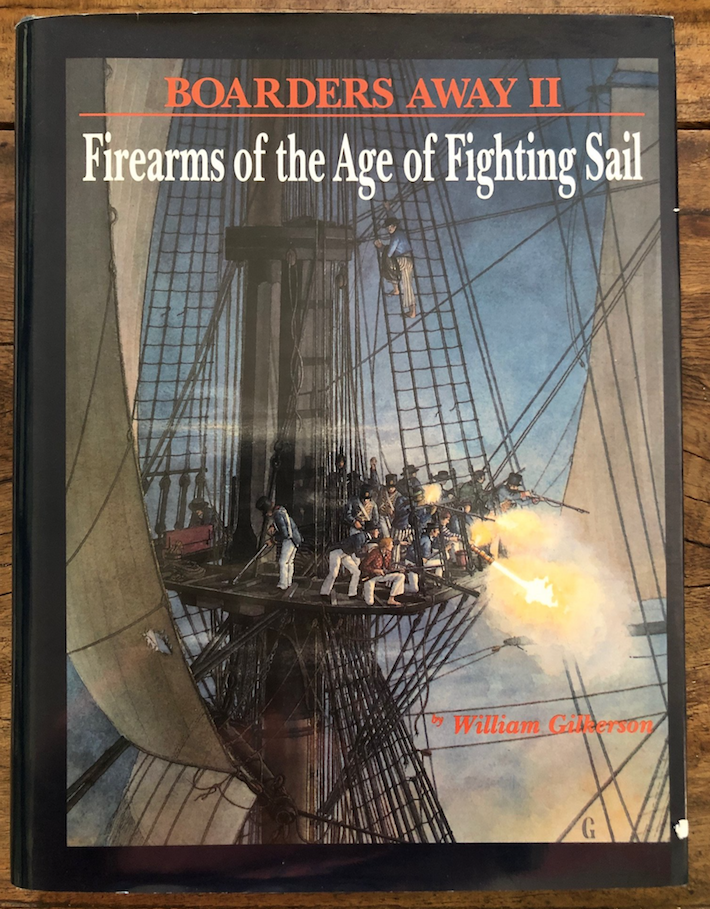 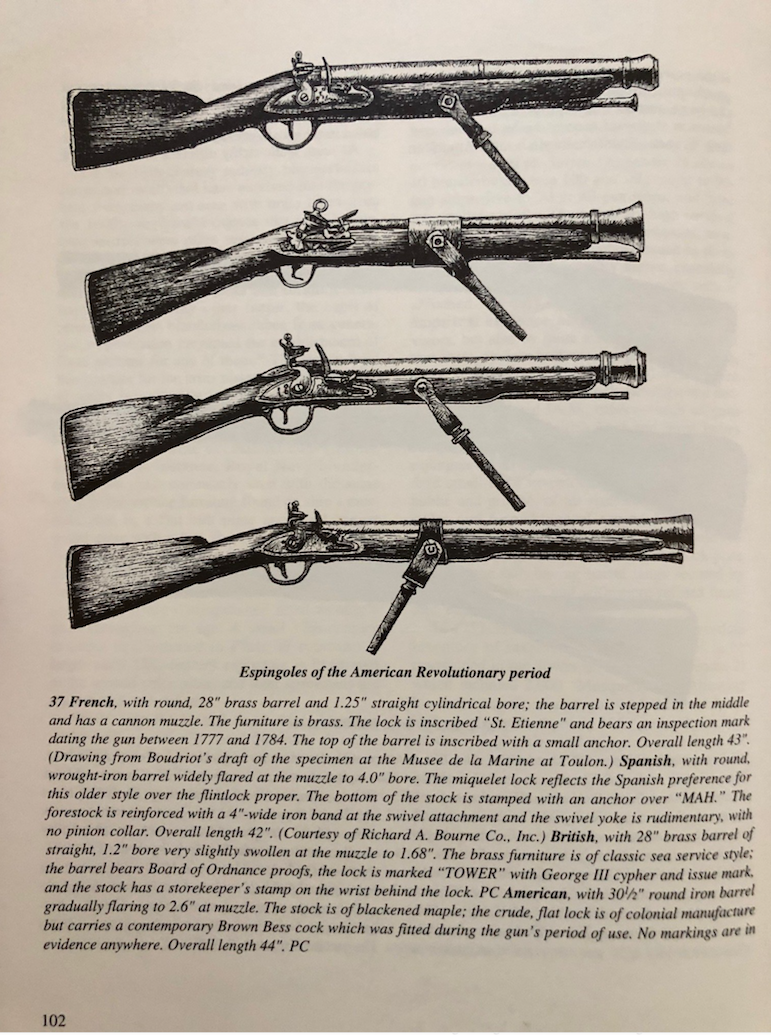 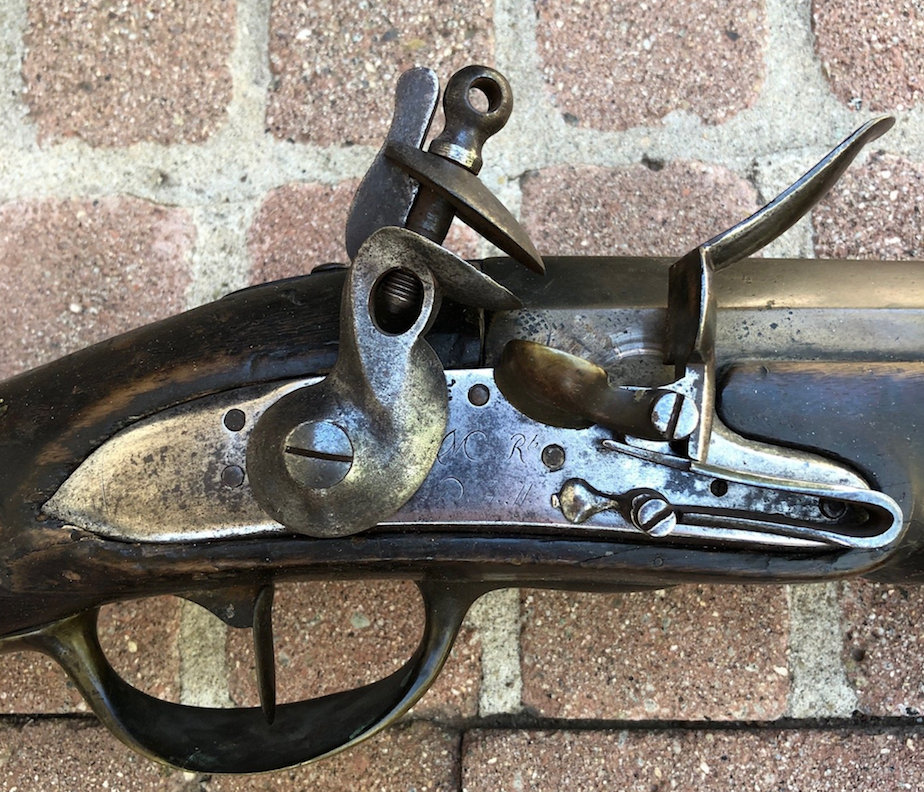