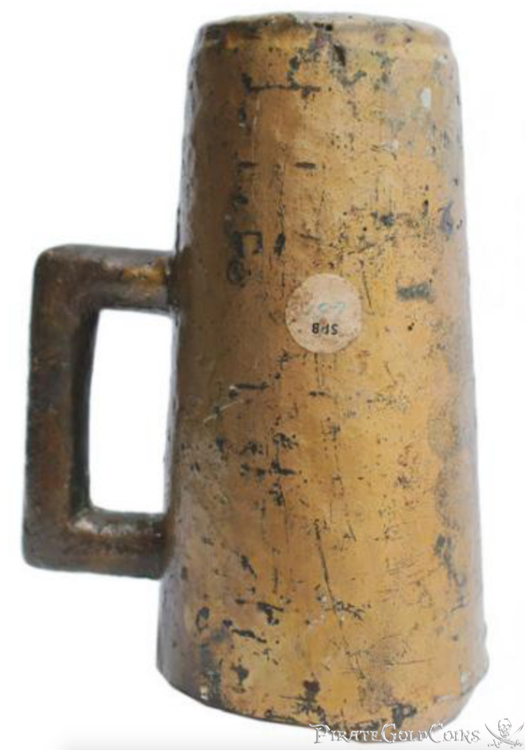 Click above image to view in eBay store
WOW! This BRONZE CANNON BLOCK BREECH (24.3lbs) is ONLY 1 of 4 Breech's known; 2 of which are in the State of Florida Collection / Museum!!!  Of the 2 in private hands this piece is far and away the best documented!  It measures out at 8-1/4" tall x 3” in diameter at the top.
​
It is featured  (Plated), both described and pictured in perhaps the most famous book ever published on the 1715 Fleet, Kip Wagner's 1966 (pages 80 & 192), "Pieces of Eight." As well as one of the most famous early auctions of Real Eight Co. 1715 Fleet artifacts, "Treasures of the Spanish Main," auction by Sotheby - Parke-Bernet (Los Angles, CA in June 1973), lot #651 still with original sticker!  See the photo in the gallery above to view the "Original moment," when this very important and Rare artifact was brought up off the ocean floor, as well as when it was unloaded onto a grassy bank with other artifacts (still in it's original state with coral encrustations and sediment).  Also, featured in above photos is the original Sotheby's Parke-Bernet 1973 catalog with photo of Breech Block)  as well as an originally signed (by all members) of the original Real Eight team inside cover of Kip Wagner's 1966 book "Pieces of Real Eight!"  Incredible documentation that is irreplaceable and highly cherished by the collecting community.
​
Block Breeches were designed specifically for quick loading of cannons.  These blocks were pre-packed with both gunpowder and ball.  They were then simply (and quickly) loaded into the breech of a cannon for quick firing.  This breech block was almost certainly used in the breech loading cannon found in 2010 (which was packed with Gold Cobs).  There's also an original Real Eight COA signed by John P. Jones (original Real Eight member).    Inscribed with "IM / BS" and cross hatched triangle below the touch hole.  The handle is 4" and certainly strong enough to handle this breech.jw 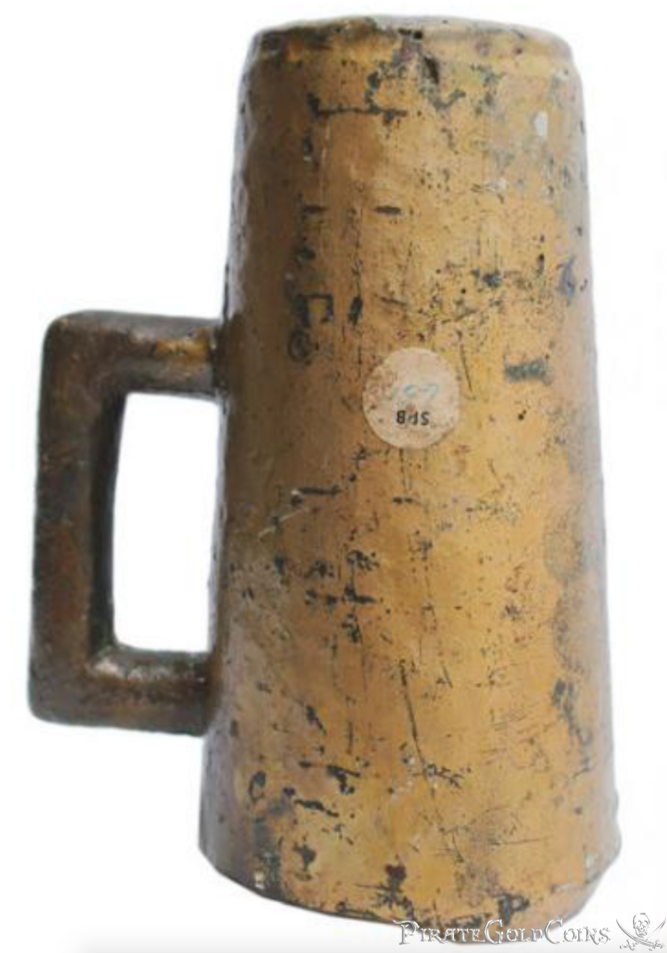 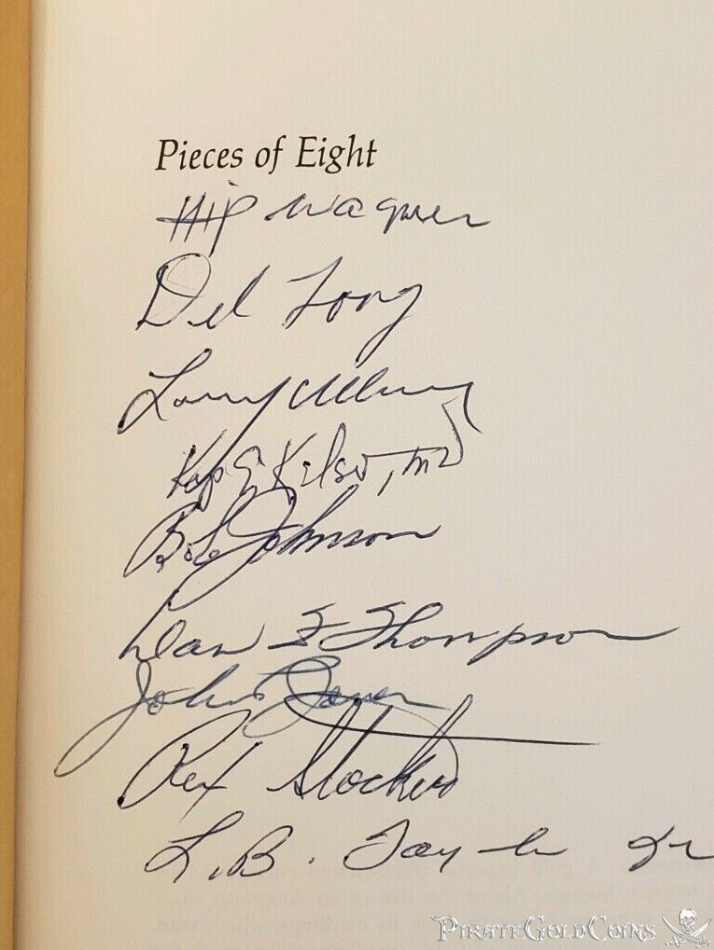 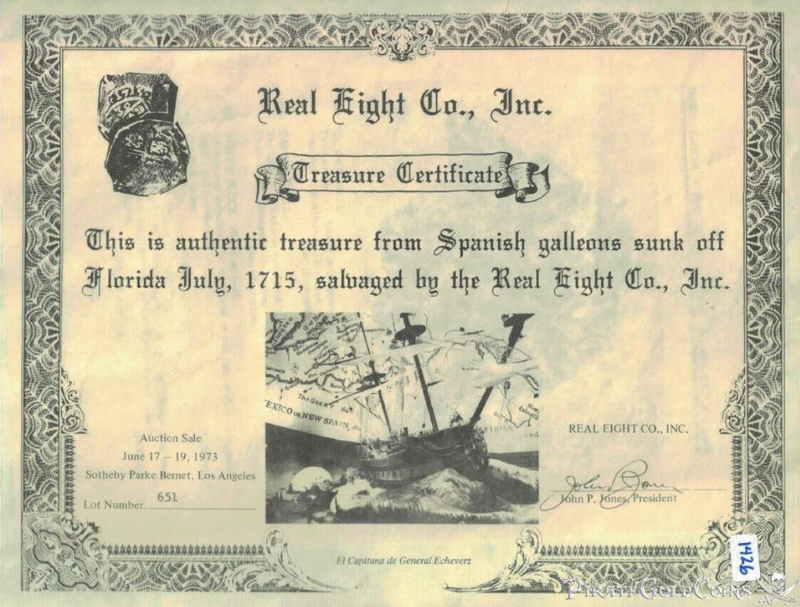 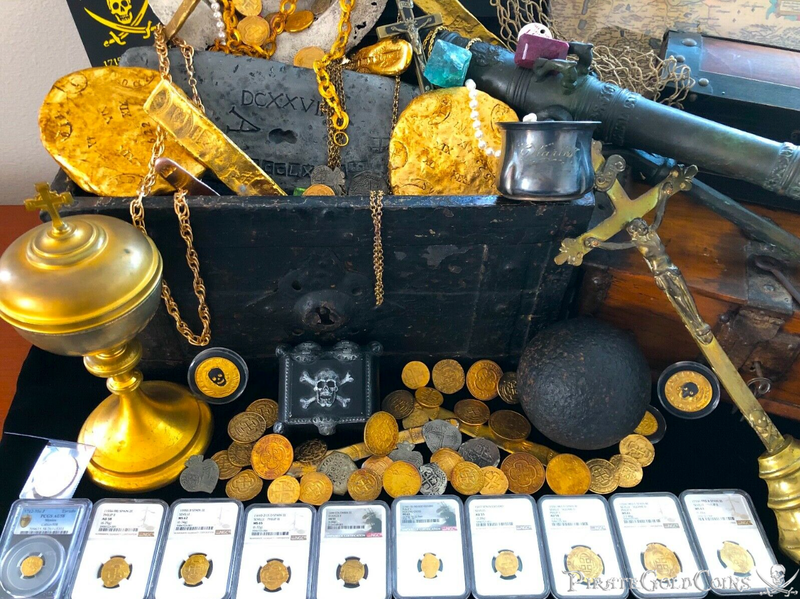 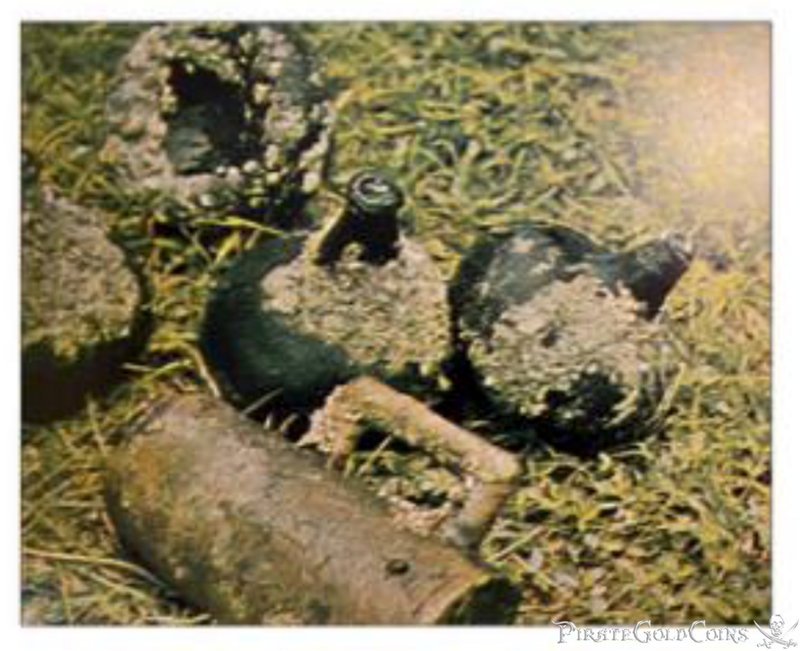 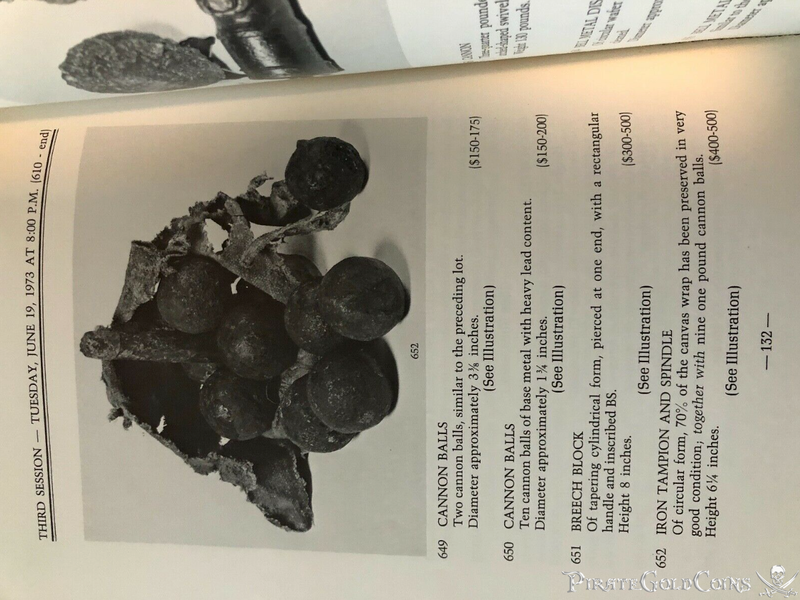 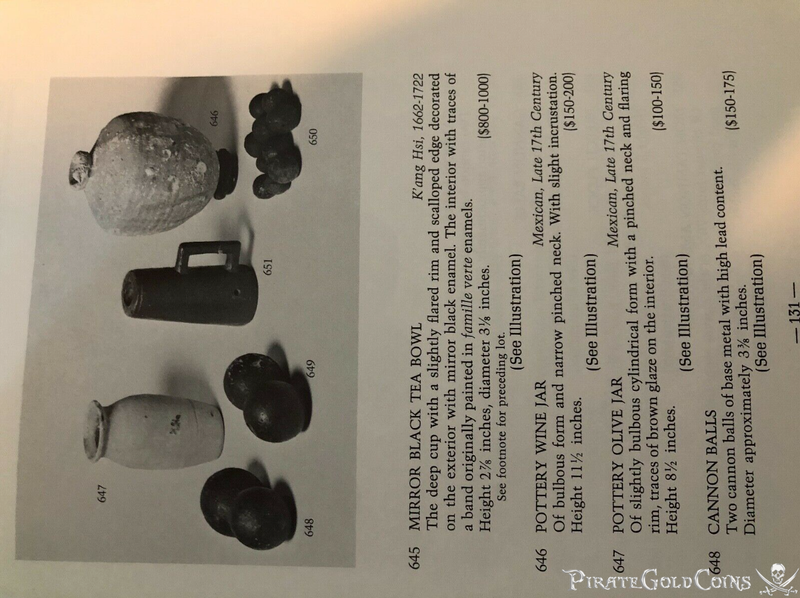 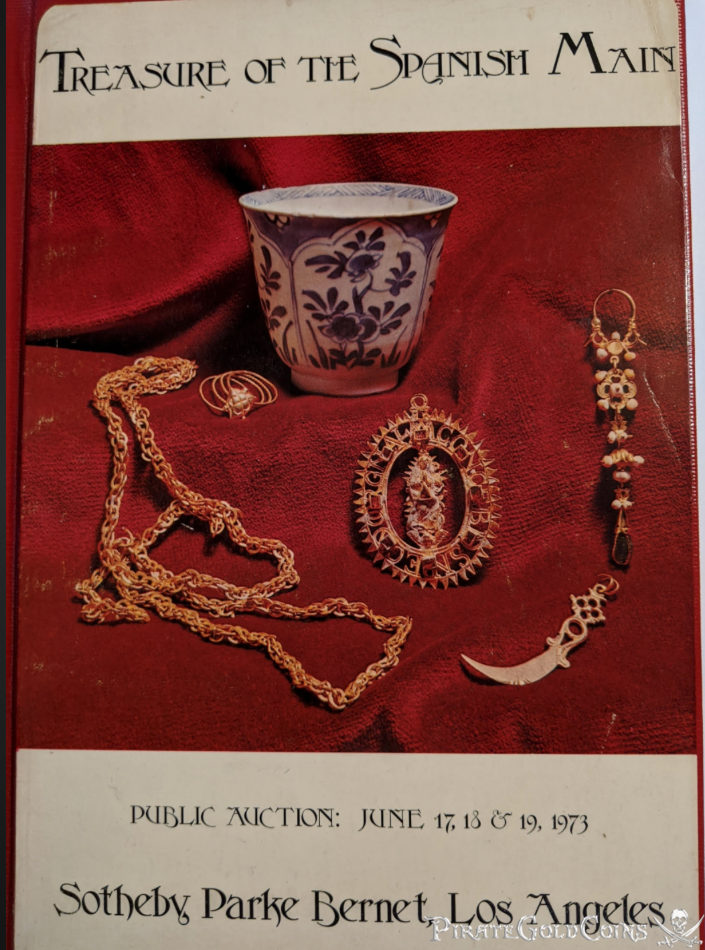 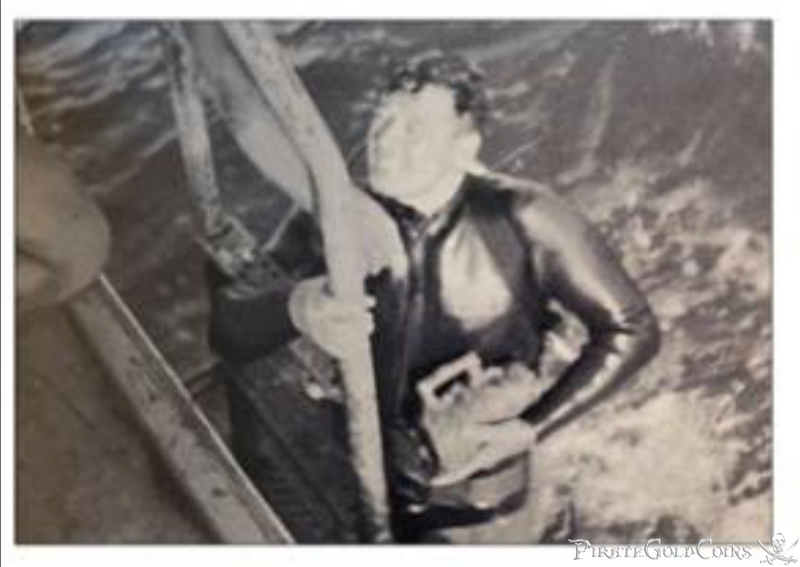 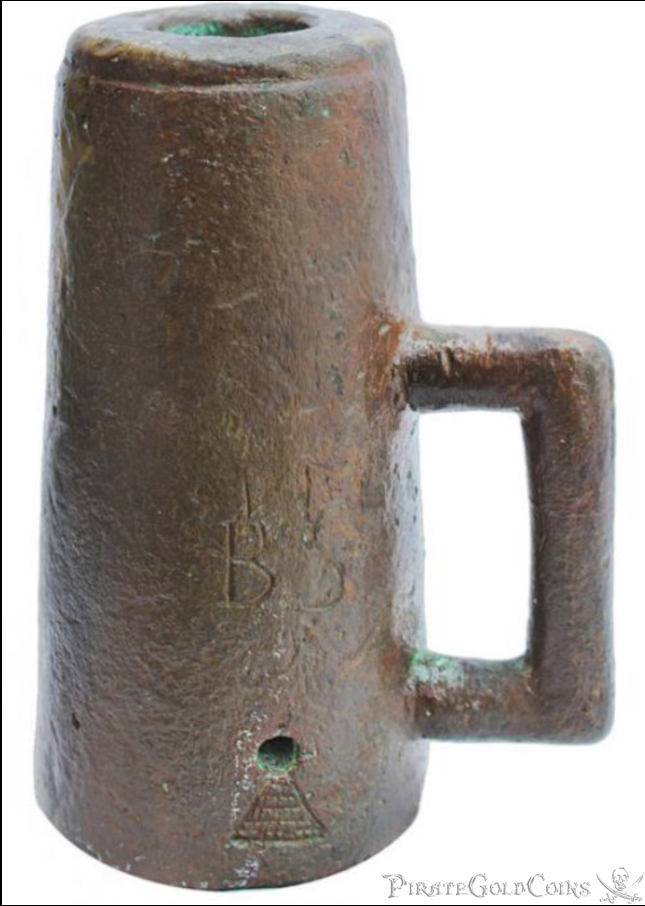