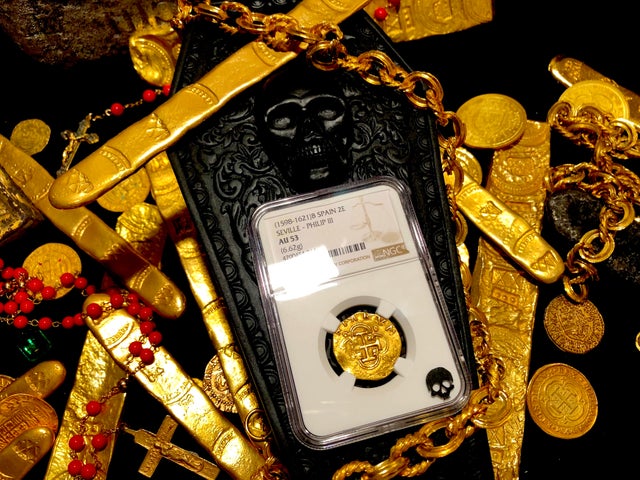 Spain 2 Escudos 1598-1621 "Philip III" NGC 53! Overall has that great "shipwreck/ pirate era" eye appeal to it that we love so much! Great centering as well on both sides, very pleasing to the eye! Full Cross with partial legends and deep toning to pop the details. The toning is even superior on the shield side, creating great detail visibility! Philip III (Spanish: Felipe; 14 April 1578 – 31 March 1621) was King of Spain. He was also, as Philip II, King of Portugal, Naples, Sicily and Sardinia and Duke of Milan from 1598 until his death. A member of the House of Habsburg, Philip III was born in Madrid to King Philip II of Spain and his fourth wife and niece Anna, the daughter of Holy Roman Emperor Maximilian II and Maria of Spain. Philip III later married his cousin Margaret of Austria, sister of Ferdinand II, Holy Roman Emperor. Although also known in Spain as Philip the Pious,[1] Philip's political reputation abroad has been largely negative – an 'undistinguished and insignificant man,' a 'miserable monarch,' whose 'only virtue appeared to reside in a total absence of vice,' to quote historians C. V. Wedgwood, R. Stradling and J. H. Elliott.[2] In particular, Philip's reliance on his corrupt chief minister, the Duke of Lerma, drew much criticism at the time and afterwards. For many, the decline of Spain can be dated to the economic difficulties that set in during the early years of his reign. Nonetheless, as the ruler of the Spanish Empire at its height and as the king who achieved a temporary peace with the Dutch (1609–1621) and brought Spain into the Thirty Years' War (1618–1648) through an (initially) extremely successful campaign, Philip's reign remains a critical period in Spanish history.arsh