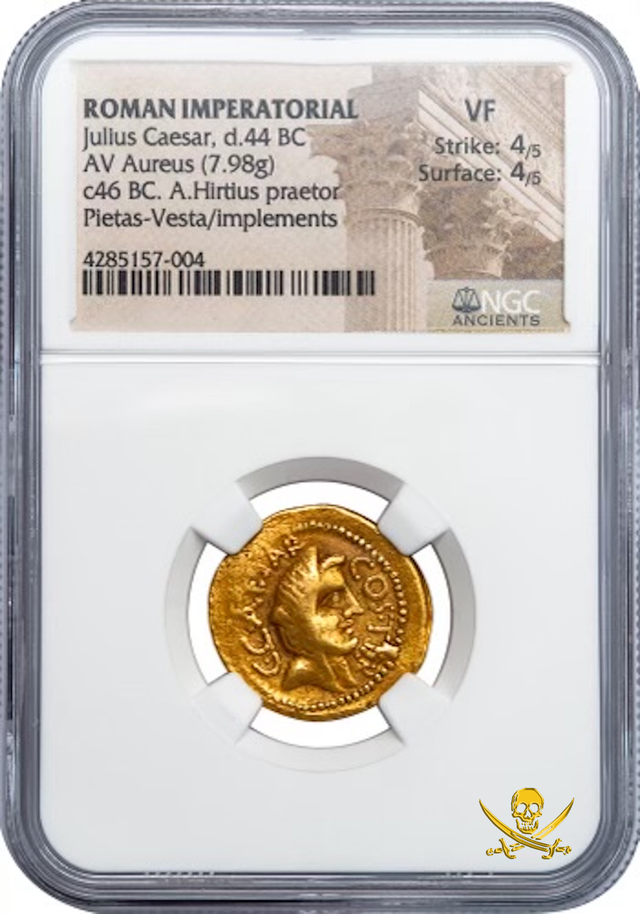 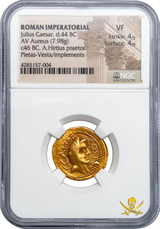 Roman Imperatorial Julius Caesar 44 BC Aureus (Gold) NGC VF 4x4! Incredible Centering and Strike for being 2000 years old! Julius Caesar as Consul for the Third Time, with Aulus Hirtius as Praetor. Aulus Hirtius was a key supporter of Caesar, who might have ended up as Caesar's successor in power had events taken a different turn. An experienced soldier, he served as one of Caesar's legates in Gaul from about 54 BC and was an envoy to Pompey in 50 BC.

He served Caesar loyally during the Civil War against Pompey and his successors in 48-45 BC. Hirtius was appointed as Caesar's mintmaster in Rome in 46 BC, and it was then that he struck the first truly large issue of gold aurei from the spoils of Caesar's campaigns. These aurei, which bear a rather enigmatic veiled female head on the obverse, were used to pay Caesar's soldiers after the great triumphal parade. After Caesar's assassination, Hirtius initially supported Marc Antony but, after taking over as Consul in 43 BC, he raised an army against Antony at the instigation of Cicero and Octavian. His army defeated Antony at Mutina in April of 43 BC, but Hirtius was killed in the fighting; his consular colleague Pansa died days later, leaving Octavian and Antony masters of Rome. Modern historians owe Hirtius a debt of gratitude for preserving and editing Caesar's Commentaries on the Gallic and Civil Wars.