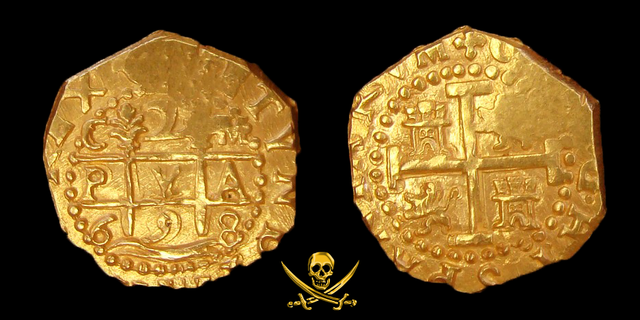 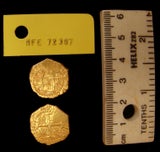 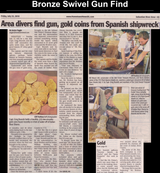 This Stunning PERU (Cuzco mint) 1698 Charles II RARE piece has about the BEST DATE I’ve ever seen! And I’ve handled many of the ones known! The Details are Strongly Struck on both sides. Rarely seen is the King’s Ordinal (cross side at about 1 o’clock) you can see about 65% of the “C” for Charles. The Castles and a Lion are very well struck as well. There’s even a good portion of the Legends and inner dot circumferences are showing (very atypical on this size planchet).bb29

FAMOUS Piece ~ Found at the famous 2010 CANNON (see attached pic of Cannon) ! This Exact piece has been featured in many mainstream media coverages, see Newspaper article. When viewing the photo go to the far right and you’ll see a couple of coins, go to the Top right coin and then move over One coin to the left, and this is that EXACT Gold piece leaning up against the other coin. These coins were Discovered in 2010 (only 17 days after buying the Lease rights to the 1715 Fleet Shipwrecks), at the CANNON featured also in above pics. There were 47 coins in total (25 inside the Cannon and 22 coins underneath the Cannon) discovered. Very few cannons have been discovered at the 1715 FLEET sites.

It was very common when the crew knew their Galleon was going to sink to place the highest valuables inside the cannon (breach area) in order to locate their cargo / treasure, since it was much easier for the survivors to locate a large cannon versus loose coins floating around the bottom. Many times these coins (loaded in haste) would fall out of the cannon on the way down and also while the cannon sat at the bottom being tossed around.